I read a recipe for chicken with preserved lemons in the Splendid Table's cookbook about a year ago. The introduction to the recipe was basically dedicated to preserved lemons and stated that "Once you've tasted good preserved lemons in a dish, they haunt you." Foods that haunt are right up my alley and I've been thinking about preserved lemons ever since. I've never had them or made them, but today I can cross preserving lemons off my list! Can't wait to cook with them... I looked around at some recipes the other day and they're all basically the same. 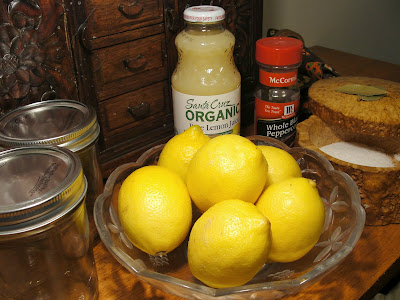 This is what I settled on for ingredients:
Meyer lemons, kosher salt, extra lemon juice, whole peppercorns and bay leaves

Preserving lemons is pretty easy to do. You cut through the lemons as if quartering them, but leave the bottom intact about a half inch so you can squash them into a jar and get into the middle to sprinkle a generous amount of kosher salt, yet the rind stays together. You salt each lemon and squish as many as possible into a sterilized jar, layering the lemons with more salt, peppercorns and bay leaf (plus a little cinnamon stick, coriander seeds and clove in some recipes). It's all covered in lemon juice and left to sit for a month before using them. And they last up to 6 months in the fridge. 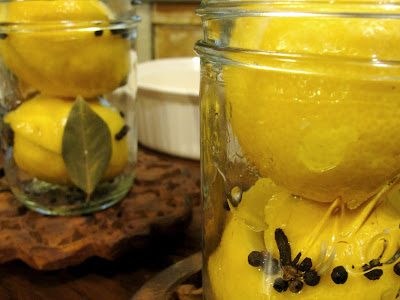 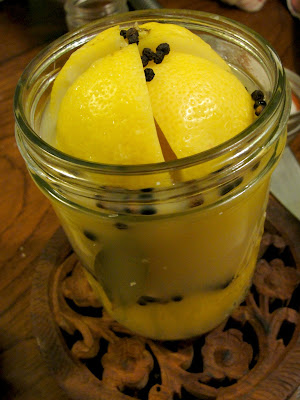 Here's what I'm going to do with them: 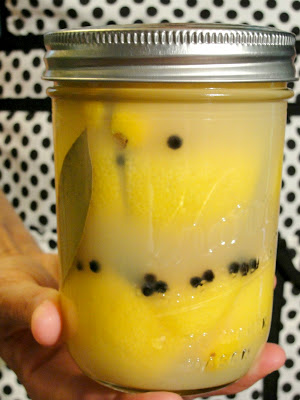 Sweat some chopped garlic and onion in a large skillet. Add chopped, cooked chicken. Crush a few whole canned tomatoes into the pan and add something sweet like pumpkin, squash, or diced sweet potato. Add turmeric (a little bit), cinnamon, cloves and red pepper flakes (a very little bit), and coriander and cumin (a palmful each). Then I'll slice up a half of a preserved lemon peel and stir it in before I cover it all in chicken broth. I'll let it cook uncovered until the potatoes are well done and it's thick enough to spoon onto naan bread. Do you think the lemon will get bitter? I don't know.

Update: No, they are not bitter and don't cause your food to taste bitter. I can eat these straight from the jar (and have!). They can be sliced into salads, chopped into chutneys, and used liberally in any recipe that craves citrus. I've also found the leftover salty juice in the jar to be tasty in place of salt and citrus in soups and stews. Yum!

Enjoy!
Posted by Created by Hannah Grunzke at 7:10 PM