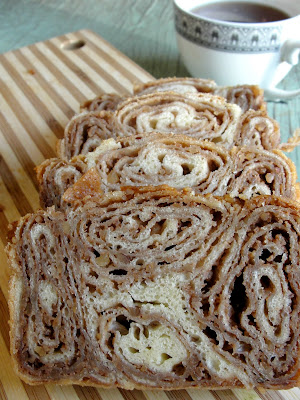 The Daring Baker’s October 2011 challenge was Povitica, hosted by Jenni of The Gingered Whisk. Povitica is a traditional Eastern European Dessert Bread that is as lovely to look at as it is to eat!

When I saw the first photos of Jenni's Povitica (pronounced poh-vi-teet-sah) and how short her recipe was, I was really excited to experience the creation of this crazy awesome Croatian and Slovenian pastry! I had never seen or heard of anything like it. And now it's on my list of breads to get creative with - which was my ultimate goal in joining the Daring Bakers club. 4 challenges in and it's a growing success!


Of course when I say the recipe is "short" I mean several pages versus the 8 to 20 page recipes I have encountered thus far in the Daring Bakers club. But really, I completed the challenge in an easy morning and there was nothing daunting about it.

These 4 photos, courtesy of Jenni of the Gingered Whisk, show the basic steps: make the dough, make the filling, stretch the dough really thin and spread the filling over, roll it, then curl it all up into a bread pan before baking.

I had some extra dough and let my little girl make her own little citrus marmalade version. Both the traditional nutty loaf on the left and her sweet little loaf were a treat for the eyes and the tummy! Well, not the tummy I have to squeeze into jeans, but...well worth it! 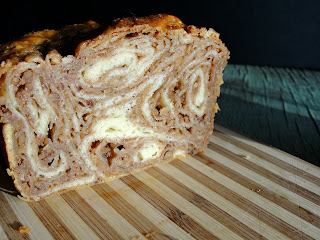 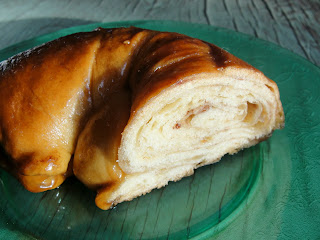 The finished bread wasn't actually as sweet as I expected. Kind of a creamy nutty flavor and really mildly spiced. I can imagine all the possibilities of what I will fill this bread with in the future, especially after knowing it's a pretty easy recipe to tackle. 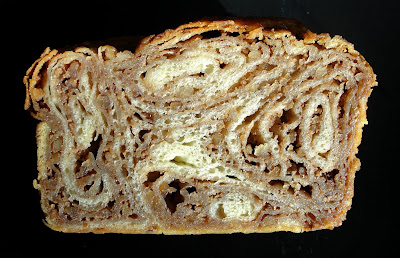 Here's is the recipe as given - but first a few notes -

*Don't over-mix your dough. Mix just until it's all together, then knead just until the dough isn't sticky before letting it rise.
*The filling might seem really thin and runny to you. This is a good thing because when you stretch your dough out really thin it will be huge and will tear easily. The runny filling spreads nicely and doesn't rip up your dough if you're careful.
*I made the recipe exactly as written, except to the filling I added a cup of the spiced citrus marmalade from my last post. It was yummy. There are probably a million possibilities for fillings that would be amazing in the bread. I would suggest that your filling is either able to be sprinkled or runny enough to spread easily.
*It's not rocket science how you coil up your "rope" in the pan. I've seen many versions from fellow daring bakers and they were all beautiful and seemed to turn out fine.
*Be sure you cool the loaves in the pan for a half hour. Then you will probably want to chill the bread before slicing. It's really fragile, especially the top, so use a very sharp knife.
*Read the recipe twice before you start. Preferably not 2 hours before you have to be somewhere.
*Besides that, it's easy!

To Activate Yeast:
1. In a small bowl, stir 2 teaspoons sugar, 1 teaspoon flour, and the yeast into ½ cup warm water and cover with plastic wrap.
2. Allow to stand for 5 minutes

To Make the Dough:
3. In a medium saucepan, heat the milk up to just below boiling (about 180°F/82°C), stirring constantly so that a film does not form on the top of the milk. You want it hot enough to scald you, but not boiling. Allow to cool slightly, until it is about 110°F/43°C.
4. In a large bowl, mix the scalded milk, ¾ cup sugar, and the salt until combined.
5. Add the beaten eggs, yeast mixture, melted butter, and 2 cups of flour.

6. Blend thoroughly and slowly add remaining flour, mixing well until the dough starts to clean the bowl.
7. Turn dough out onto floured surface and knead, gradually adding flour a little at a time, until smooth and does not stick. Note: I did not use all 8 cups of flour
8. Divide the dough into 4 equal pieces
9. Place dough in 4 lightly oiled bowls, cover loosely with a layer of plastic wrap and then a kitchen towel and let rise an hour and a half in a warm place, until doubled in size.

To Make the Filling:

10. In a large bowl mix together the ground walnuts, sugar, cinnamon and cocoa.
11. Heat the milk and butter to boiling.
12. Pour the liquid over the nut/sugar mixture.
13. Add the eggs and vanilla and mix thoroughly.
14. Allow to stand at room temperature until ready to be spread on the dough.
15. If the mixture thickens, add a small amount of warm milk.

To Roll and Assemble the Dough:

16. Spread a clean sheet or cloth over your entire table so that it is covered.
17. Sprinkle with a couple of tablespoons to a handful of flour (use flour sparingly)
18. Place the dough on the sheet and roll the dough out with a rolling pin, starting in the middle and working your way out, until it measures roughly 10-12 inches in diameter.
19. Spoon 1 to 1.5 teaspoons of melted butter on top.
20. Using the tops of your hands, stretch dough out from the center until the dough is thin and uniformly opaque. You can also use your rolling pin, if you prefer.
21. As you work, continually pick up the dough from the table, not only to help in stretching it out, but also to make sure that it isn’t sticking.
22. When you think it the dough is thin enough, try to get it a little thinner. It should be so thin that you can see the color and perhaps the pattern of the sheet underneath.

24. Lift the edge of the cloth and gently roll the dough like a jelly roll.

25. Once the dough is rolled up into a rope, gently lift it up and place it into a greased loaf pan in the shape of a “U”, with the ends meeting in the middle. You want to coil the dough around itself, as this will give the dough its characteristic look when sliced.

26. Repeat with remaining three loaves, coiling each rope of dough in its own loaf pan.
27. Brush the top of each loaf with a mixture of ½ cup of cold STRONG coffee and 2 tablespoons of sugar. If you prefer, you can also use egg whites in place of this.
28. Cover pans lightly will plastic wrap and allow to rest for approximately 15 minutes.
29. Preheat oven to moderate 350°F/180°C/gas mark 4.
30. Remove plastic wrap from dough and place into the preheated oven and bake for approximately 15 minutes.
31. Turn down the oven temperature to slow 300°F/150°C/gas mark 2 and bake for an additional 45 minutes, or until done.
32. Remove bread from oven and brush with melted butter about 20 minutes before the bread is done baking.
33. Check the bread often toward the end to ensure that the bread is not getting too brown. You may cover the loaves with a sheet of aluminum foil if you need to.
34. Remove from the oven and allow to cool on a wire rack for 30 minutes, still in the bread pan. Remember, the bread weighs about 2.5 and it needs to be able to hold its own weight, which is difficult when still warm and fresh out of the oven. Allowing it to cool in the pan helps the loaf to hold its shape.
35. It is recommended that the best way to cut Povitica loaves into slices is by turning the loaf upside down and slicing with a serrated knife.

Keeps for a week in the fridge or a month in the freezer.

Enjoy!
Posted by Created by Hannah Grunzke at 4:00 AM