Dinner with Strangers (and how to make kale chips, mushroom soup and bread gushers)

I've been committed to beautiful food photos and well-thought recipes through my 7 months of blogging. Today I have a story of imperfect food and the perfect meal. We had a couple guys we had never met over for dinner this week. Here's how it came to be, in a nutshell:

I read an article in the Duluth newspaper about a guy named Adam that's spending the month of January in Duluth and blogging about his experience. Being a ginormous fan of Duluth, I immediately went to the blog site and left an exuberant message expressing my adoration for this city. The second I hit "post" I kicked myself for not thinking to invite him to dinner but, oh well. A couple days later, I'm at the Duluth Art Institute's Member Exhibition opening and I see this guy in bright plaid and I immediately knew it was Adam, the Duluth blogger. I proceeded to nose into what he was doing to introduce myself and express additional excitement for Duluth and blogging. In no time he reads my mind and invites himself to dinner, which I accept (with additional exuberance). I really love cooking for people more than most things in life, so I'm pumped.

My dinner plan is kale chips, creamy mushroom and winter vegetable soup and a yeast bread roll that bakes up super quick and is awesomely easy and delicious (recipes below). My blog concept -the idea being we are doing a guest blogger kind of thing- is how to whip up a super yummy meal on a typical school night in my home (in January, in Duluth).

Adam and his guest are running a little late and the soup gets off to a swimming start in peace while my girls get dolled up. Then bring on the guests, all smiles and chatter and at times a big black mic near the face (the only source of mild discomfort for the night). Adam and his friend, Jack, are dream dinner guests. Comfortable, funny and not the least bit shy, they jumped right into the circus that is my girls and doubled the decibels in the house before their snappy shoes were off.

It would be a stretch to say this was a typical evening meal for us. Generally this involves my girls and I chatting as I slice, dice and saute while we wait for Steve to get home for a love and laughter filled meal. This night, Adam and Jack bound in and after a couple minutes examining the menu, we turned to extreme team entertainment by my girls complete with a soundtrack incidentally created for a dodgeball tournament.

We usually save the dance party for dessert, but the girls clearly know this is a celebration.

My cooking went south after this and while the kale chips were pretty tasty, I forgot to add the oatmeal I had planned to thicken the soup (sounds odd but try it, it's wonderful). And I hate to admit but once again I noticed a flaw in my process of cooking the bread (too close to the broiler) and completely ignored my pleas to listen to myself (typical) so the rolls turned out to be what Adam termed "bread gushers" as in "fruit gushers." I'm sure you can imagine. But we ate and laughed and lingered at the table playing Pancakes or Waffles (recipe below) until way past the girls' bedtime. 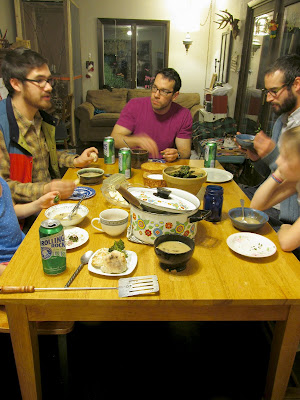 Knowing my family could very well spend our days eating decent food for the sake of eating before turning on our shows until we tucker out, this night was a classic reason I love cooking. Even if the food's not perfect. If I am gonna cook, it's gonna be good. As good I can muster (in Thursday evening's case I welcomed it suffering in spite of the hullabaloo) and if I am lucky enough to occupy a table with a group of friends or family it's gonna be fun. I mean, what's not fun about bread gushers and games with 8 year olds? I like to make good use of my time and cooking well is important to me. It is clear to me that Adam is skilled at making good use of his time. He wasted none diving into an awesome night in the midst of a January in Duluth that he could have just as well spent chilling out to movie marathons between jobs. I think that's pretty cool.

Steve and I had a delightful evening with what felt like old pals (I'm sure they've heard this a lot this month) and apparently my girls had a night to remember because they recounted most of the evening over another dinner with friends today.

Creamy Mushroom and Winter Veggie Soup
In oil in a soup pot, brown chunky diced veggies such as rutabaga, parsnip, carrot, onion and potato. In a separate skillet, saute a large amount of roughly chopped mushrooms in hot oil, in batches to promote deep browning. Add mushrooms to the soup pot and spread the veggies to the edges, creating a spot in the center for a couple pats of butter and a handful of sliced garlic. Sprinkle flour over all. Stir for a minute while the flour browns to a light caramel color. There should be enough fat in the pan to coat the flour (no dry white spots). If not, drizzle with olive oil and stir together. Add broth to cover the veggies by an inch and whisk over medium high heat until the mixture boils and thickens a bit (a few minutes). Add a couple splashes of heavy cream and salt and pepper to taste. Simmer until the veggies are tender (if not already). This is a good soup and a good quick-cooking technique to have under your belt. If you want it thicker, add a sprinkle of oatmeal and simmer until the oatmeal is tender. If you want it thinner, add broth or cream to the desired consistency.

Mix all together well in a bowl. Cover with a towel and let it sit for 8-12 hours. Punch it down and knead a time or two . Heat a cast iron skillet over high heat. Heat the broiler in the oven with the rack set third from the top (near the center of the oven). Tear off a piece of dough and flatten it into a 1/2 inch thick round. Flip your skillet over and place your dough on the bottom, then slide it under broiler. After several minutes it will puff up and it's done when the top is toasted. Heat the bottom of the pan for each round of dough. This is easiest with 2 pans-one heating on the stove while the other sits under the broiler. Don't rush, unless you want to try my famous bread gushers!

Kale Chips
Remove the ribs from a bunch of kale. This stuff's tasty, it won't feed as many as you think. Drizzle a little olive oil over the leaves and toss with your hands. Spread them out flat in one layer on a sheet pan. Sprinkle a bit of salt and pepper over and place in a 300F oven. Flip after 10 minutes and remove after another 10, or when the chips sound crispy when you give the pan a shake. I think these taste like almost burnt pumpkin seeds and I love them.

Pancakes or Waffles (game play)
Sit around in a circle. Someone says "pancakes or waffles?" and all players pipe in with their pick. Me? Pancakes and here's why! Say pancakes gets the most votes, the next person in the circle says "pancakes or ____" the blank being filled in with something of roughly equal value in their opinion (or something outrageous in some people's case). The winning choice always goes up against the next player's choice. Ties, of course, are determined by rock paper scissors. And around it goes!

Thanks Adam, for making us part of your awesome project-adventure! 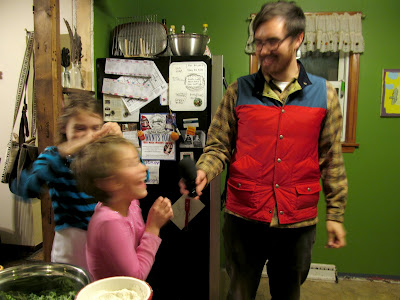 Enjoy your day!
Posted by Created by Hannah Grunzke at 12:51 PM