Unlike the simplicity of last week's preserved herbs, I always thought "Ugh. Canning pickles seems like a lot of work."  Truth is, with a tiny garden or a quick trip to the market, a multi-purpose brine and a variety of crunchy vegetables, you can easily make a small batch of awesome pickles in a quick afternoon! 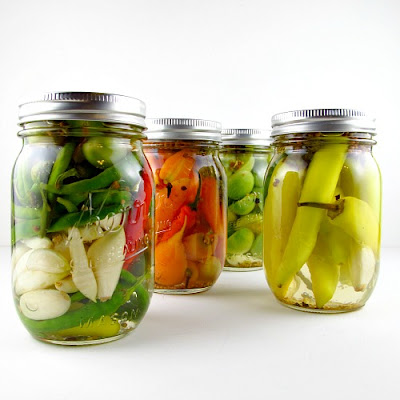 I have to start this off with a disclaimer:  I only make pickles in vinegar, salt and sugar and I do my sanitizing and sealing of jars in the oven.  No water baths for me.  This is an old trick that was even at one point noted in the Ball jar book of canning but it is no longer considered proper food safety.  I would never can any food products not suspended in vinegar this way because it's a really bad idea.  Check out this post for the great debate (pretty heated comment section)!  With that said, for today's project, the oven will do just fine for me but if you're squeamish, use a water bath. 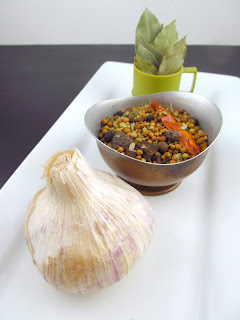 I season my pickles, like everything, with lots of garlic.  I also use a store bought pickle spice mix which contains mustard seed, allspice, cinnamon and so on.  This mix also contains bay leaf.  If I use no spice mix in a jar, sometimes I will throw in a bay leaf.

I like to go heavy on the dill.  I also use whole peppercorns and love the flavor it gives the pickles but by golly I forgot to use them today!  Dang. 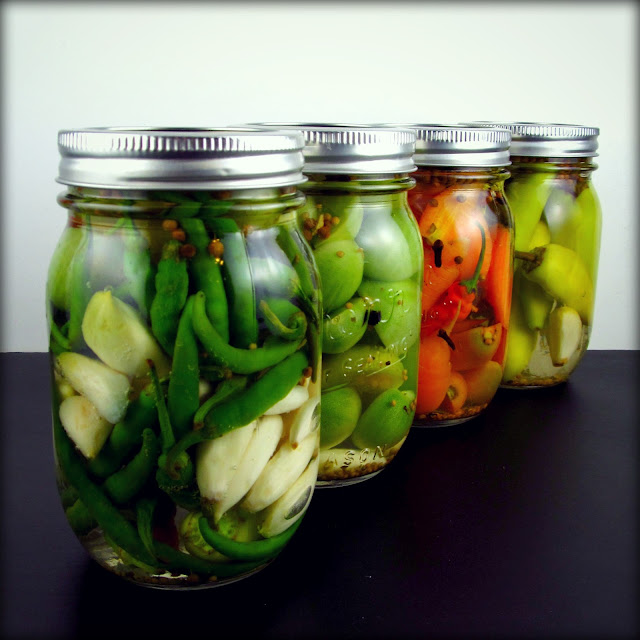 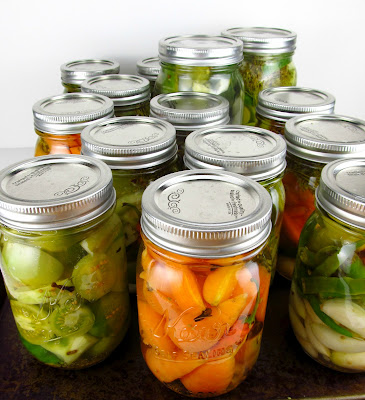 Pretty much any food can be pickled and I've discovered they're good eating almost right away.  I cracked open a couple jars within a few days of making them and they were all so good! There's nothing like a homemade pickle.

If you figure out correct proportions for a small batch of brine, you can even make a jar or two at a time when you've got extra veggies lying around!

For vegetables, today I used carrots, spicy peppers, sweet peppers, green tomatoes, cucumbers and garlic.  I had a small pile of each of those things and it was the perfect amount to fill a box of one dozen pint sized jars.  No two jars of pickles have to be the same!  Use a little of this and a little of that.  If you want to know what you've put in a jar, (though it's fairly obvious by looking at it) mark the lid with a sharpie marker and when you find your favorite, you'll be able to recreate it year after year.

You will need about 8 to 10 pounds of vegetables.  For me, that totaled about 5 medium mixing bowls of prepped vegetables.
Prep your vegetables by washing and slicing them.  Cut carrots in halves or quarters, slice cherry tomatoes in half, slice cucumbers and large tomatoes in thick slices, or leave things whole if desired.  Set everything you need out on a large table, along with your spices (dill tops, garlic cloves, pickling spice, whole peppercorns and bay leaf).

Wash 12 pint jars, lids and bands in hot soapy water.  Rinse well and place on a large sheet pan along with a clean heat proof funnel, tongs, and butter knife.  Heat oven to 300F and bake items on the sheet pan for 30 minutes.  Turn off oven and open the oven door to allow them to cool a bit while you heat your brine.

Fill your jars with vegetables.  Add up to 2 or 3 dill tops, several garlic cloves, one teaspoon pickling spice (heads up-strong flavor), one teaspoon peppercorns and one bay leaf (if not using pickling spice) per jar.  You may choose to add no spice but the dill tops.  Using a sterilized funnel, fill the jars nearly to the top with hot, almost simmering pickle brine.  Poke the sterilized butter knife around in each jar to release trapped air bubbles and fill with more brine if necessary.

Using a clean paper towel, wipe the rims of the jars. Quickly, using sterilized tongs (a magnet is also handy here), place lids and bands on jars.  Tighten, but not crazy tight (just until it provides resistance).  Immediately place the sheet pan of completed jars with lids into a cold oven.  Turn the oven on to 350F.  Turn off the heat as soon as it's preheated and do not open the oven until at least 10 hours has past (overnight).  Your jars should be sealed in the morning.  Remove bands and store in a dark place to maintain color.  They should last longer, but to be on the safe side, use within a year.  If a jar isn't sealed (pops when you push it), keep in the fridge and use as you would an open jar of pickles.

Notes:
You will likely have extra brine.  It can be reused (boiled first), or you can pour it over extra vegetables in any container and treat it as a refrigerator pickle.

It's kind of cool to add extra sugar to the brine here and there as you fill jars, if you're into sweeter pickles.  The sweet ones are especially delicious with the pickle spice mix.

Pickle spice mix contains not very many allspice berries or cinnamon pieces so if you want to avoid them, you can just go for the little yellow mustard seeds.

You can use a teaspoon or two of dill seed if you don't have tops.  Or use a handful of dill weed.  This is not traditional, but I've done it in a pinch.

Garlic tends to turn blue if you use well water with traces of copper.  This is normal and they are fine to eat.

One nice thing about small batch pickles is if you're worried about them going bad, you can eat them up quickly or tuck them into the fridge.  Or you can always use the water bath method for sterilizing and sealing jars.  You don't actually need anything to do this but a huge pot of water (the wire basket thing is technically optional).  Cover the jars by an inch with boiling water and process for 15 to 20 minutes.  That's the gist- be sure to look it up for details.

Enjoy!
Posted by Created by Hannah Grunzke at 2:51 PM