The Art of Seed Beading 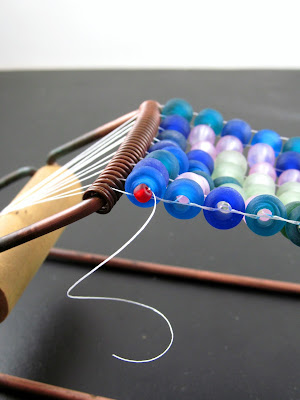 I've been beading since I was little, in fact, I'm still working on the same loom that I received for Christmas when I was about 9.  I started out loom beading, and went on to many forms of jewelry making, bead embroidery and incorporating beads with other media in art.  Seed beading can be as complex or as simple as you make it.  While the tradition is founded in clothing and jewelry, I've always thought decorative wall hangings and sun catchers made with transparent glass beads were really cool projects. 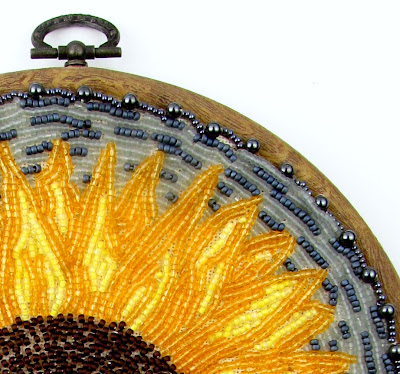 While loom beading is tricky and requires a tutorial (below), bead embroidery is not difficult.   I like to do the work on a decorative embroidery hoop so when I'm finished, it's ready to be hung.  Using embroidery cloth mounted tightly on an embroidery hoop, sketch your image onto the fabric. Push a threaded needle up through the cloth, fill it with beads, measuring the length of your bead strand by holding it up against your patterned cloth.  Attach the strand by sewing down through the cloth in just the right place and continue as such.  In some areas you can use long strands of beads and tack the strand down with a little piece of thread (such as the long lines of these sunflower petals).  Some areas work best if you work one bead at a time (as in the brown center of the sunflower).  This isn't a craft I learned from a book, it's something I figured out and played around with as a kid.  Bead embroidery is the perfect project to use creativity and to "play it by ear."

Loom beading, on the other hand, takes planning and greater precision.  I have a manufactured loom that suits me fine for small projects such as little sun catchers, short necklaces and bracelets.  I also have a large loom, 3 feet by 1 foot, for bigger projects.  That loom, like others I've seen, is made of boards nailed together in a long rectangle with a screw and a coil on each end.  Very easy to make at home, I imagine.  Here's one example of how to do it. 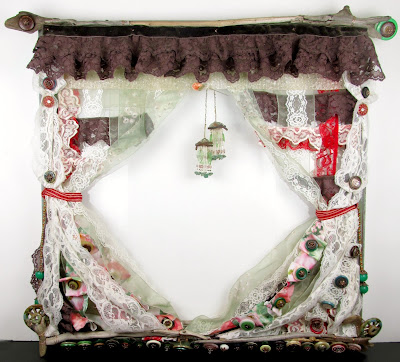 I used the large loom to make a couple components on this art piece: an old adorned window I made years ago for an art show.  I used loom beading to create the tie backs out of matte red and white seed beads and also to create a valance out of beautiful Italian rough cut beads. 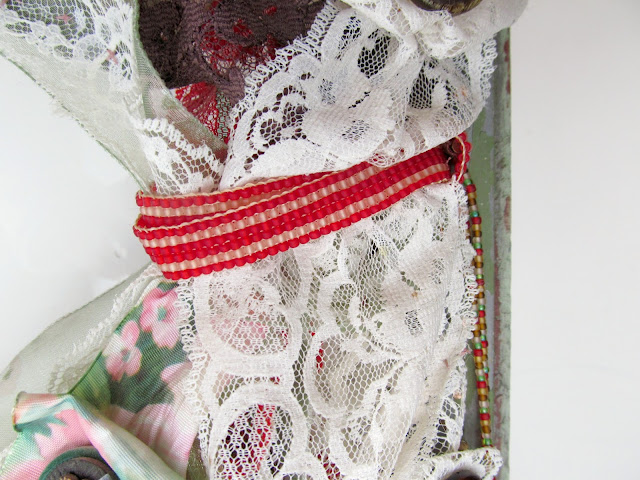 The tassels were made of several types of stones and beads, hung in clusters from some little metal tassel findings that I purchased.

Loom beading begins by planning your project and stringing your loom.  I draw out my plans on notebook paper as seen here.  Vertical lines are loom threads, notebook lines are rows, each square is one bead.
The rows are strung horizontally one row at a time.  I drew out my heart and drew out my loom threads so I would know how many looms threads I needed (exactly one more than the number of beads wide).  Note that this beaded heart project is made using large glass beads, not seed beads, so you can see the process better. 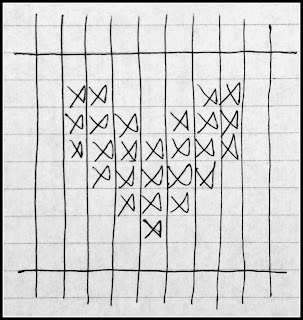 When attaching the beads to the loom, you read the pattern as such:  First row (top), all background color: nine blue/green beads.  Second row, top of heart: one background bead, 2 heart beads, three background beads, 2 heart beads, one background bead (equals nine).  Each bead is placed on your weaving string one bead at a time and each row is attached to the loom one row at a time.  If you're creating one long row of the same bead color, you can pile the beads on your needle, count them when it looks right and add or subtract beads as needed before attaching the row to your loom threads.  Here's how it works: 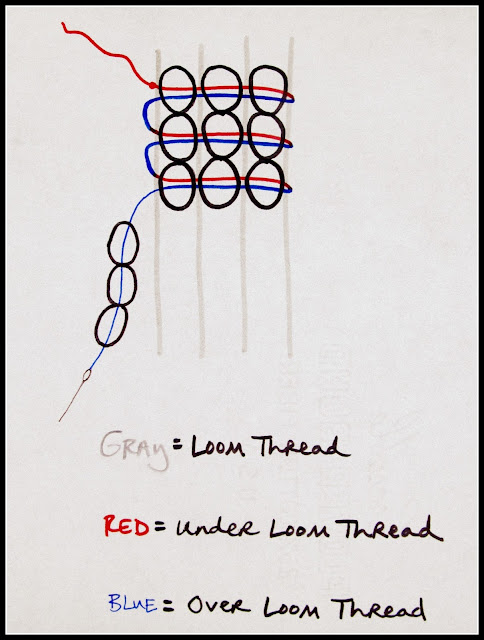 The gray loom threads (exactly one more thread than the width of your rows, in this case 4 threads are needed) are attached to the loom at the top and bottom.  The weaving thread (blue and red) should be long and start with a needle on one end and a small bead tied on with one overhand knot on the other end (do not double knot the bead end, you will need to remove the bead later).  Leave 6 inches of slack on the bead end.  String one row of beads onto your weaving thread (in this example, 3 beads).  With the slack end to the left, push the beads up through the loom threads, horizontally, so that one loom thread is between each bead.  Holding the row of beads up through the looms threads, push your needle through the beads, from right to left, ensuring the needle is going over the top of every loom thread (never under).  In the photo above, the beads on the left (near the needle) are waiting to be pushed up between the loom threads from underneath (their thread color would then shift to red) to create the next row.  Sew back through the beads from right to left, passing the needle above the looms threads to the secure the beads to the loom.  String more beads for the next row and repeat.  *Note that I am left handed.  I don't know any other loom beaders so I can't say whether my stringing the beads on the left, pushing the needle back through from right to left is universal.  Flip it if that feels better for you.

Note:
Use waxed beading thread and long beading needles.  Unwaxed thread will tangle and regular sewing needles have an eye that is too big for some seed bead holes.

If you crochet, you know that ending and starting a skein of yarn isn't fun when you're learning.  Same here, you will dread when the weaving thread runs out.  Just start over with a new thread with a bead tied loosely on the end and when the project is complete, weave the extra threads through the beads until it's all properly secure.

Reinforce knots and thread as needed with clear nail polish.

Be patient with this project at first.  It's easy enough for a 9 year old to learn but there are many mistakes to be made.  And unfortunately, there's usually no going back.  Many mistakes are fatal, especially when you're working with tiny beads.

To finish:
When you are left with a project completely done on the loom, detach the top and bottom threads, leaving as much slack on both ends as possible.  Remove the bead that you've tied on the beginning end.  Now you have some choices.  In jewelry, you will need to decide what type of clasp you will be using and plan how to secure the jewelry to it.  You can secure loose threads to folded strips of cloth using hot glue, then sew the cloth to the clasp.  You can secure threads using "crimps" which are tiny tubes that you thread on the string and smash with a needle nose pliers, then secure with clear nail polish.  Crimps work really well though they are visible on the finished product.  And you can always just tie the threads to clasps and secure the knot with clear polish, though this will usually result in an amateurish appearance.   If a bracelet or necklace is wide, you can use strips of cloth shaped like a triangle or trapezoid and sew your claps to that.  For sun catchers or wall hangings, you can weave threads one at a time through the beads until they disappear, though this is really hard to do in my opinion.

I have tried all of the above and then some.  I love beading and if you think you might love it, too, you likely will!  If you need any tips or have a question, leave your question in the comment section and I'd be happy to go into more detail.

Enjoy!
Posted by Created by Hannah Grunzke at 5:56 PM