Despite a couple glitches due to baking with kids today, we've made the best darn cake we've ever eaten! 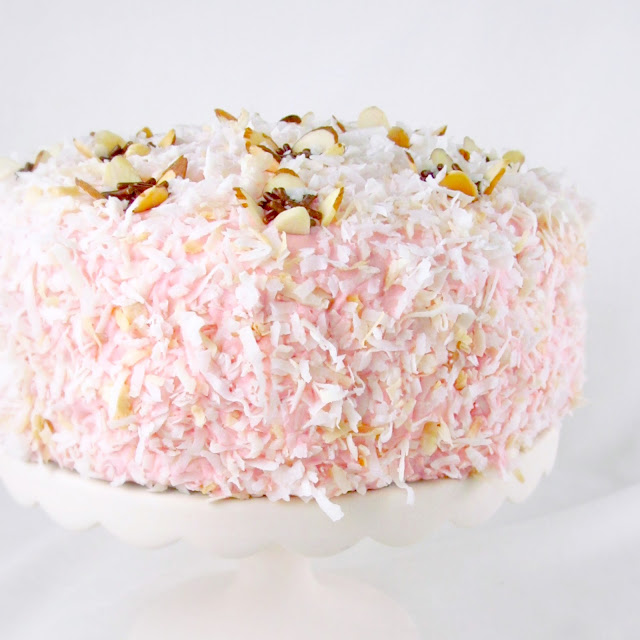 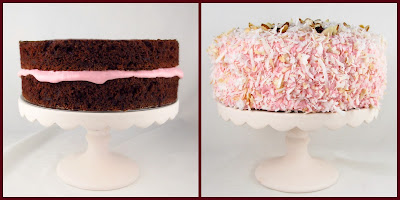 It's funny because the devil's chocolate cake was a test recipe that I wasn't certain of and it turned out incredibly well (plus it's made in one bowl, which I love).  The frosting was a recipe I could make in my sleep and it teetered on a fail today!  Undercooked in the first step, over beaten in the next, and with a sigh I saved its not so beautiful appearance with toasted coconut.  And I'm so glad I did!  I had originally planned to cover glossy waves of frosting with toasted almond flowers.  But my frosting was way too droopy for waves...closer to a waterfall than a wave.  It set up in the fridge ok but wasn't pretty.  The last minute addition of toasted coconut added another layer of flavor and crunch that pulled the whole thing together into a perfectly wonderful Valentine's cake! 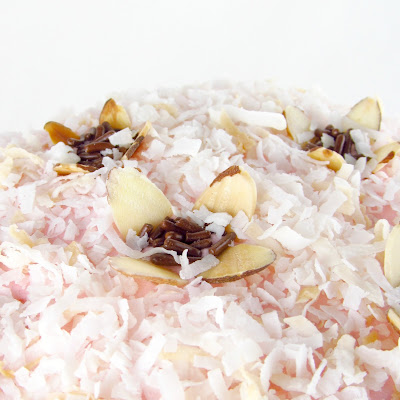 Devil's Chocolate Cake
Did you know that traditional devil's food cake includes beets in the recipe?  You won't be able to detect the flavor of beets in here, but it adds moisture to the cake and gives the devil's food a red tint.  Serves 8 to 10.

In a large bowl, sift together the sugar, flour, cocoa, baking powder, baking soda and salt. Add the eggs, milk, oil and vanilla, mix for 2 minutes on medium speed using an electric mixer. Stir in the hot coffee until incorporated.  Lastly, stir in the beets until incorporated.  Divide evenly between the prepared pans.

Bake 30 to 35 minutes until a skewer comes out clean. Cool in the pans for 10 minutes, then remove to a wire rack to cool completely.


Strawberry Cream Cheese Frosting
The texture of this frosting (when made correctly, unlike today's execution on my part) is reminiscent of marshmallow fluff.  I think this makes it perfect for snowball cake!  Makes enough to frost a large 2 tier cake.

Whisk (vigorously or it will be chunky) milk, milk powder and flour together over medium heat until it bubbles and is very thick (this will take some elbow grease but is worth it). Put the pan in a bowl of ice water to cool it completely. Once cool, whisk in the vanilla and almond extracts.

In a large bowl, using an electric mixer on high, combine the butter and cream cheese. Add sugar and mix well. Add the cooled milk paste and beat for 1 to 2 minutes until it combines and is fluffy and glossy.


Toasted Coconut
I love the texture of toasted coconut.  It tastes great and almost melts in your mouth while adding a bit of crunch versus the tough chew of shredded coconut.

Spread 2 to 3 cups sweetened shredded coconut in a thin layer on sheet pan.  Bake at 325F for 5 to 15 minutes, stirring several times until toasted to your liking. The coconut in the corners will toast quickly, so keep your eye on it.  Cool completely before use on a cake.


Toasted Almonds
The flavor of toasted almond really comes through when eating this cake, even though there are only a few flowers scattered here and there.  It's a nice touch.

Sort out 2 to 3 tablespoons sliced almonds of similar size and shape.  Spread the almond slices in a skillet in a single layer and heat over medium, shaking the pan often, until the slices are beginning to brown on the undersides.  The oils in the nuts will burn quickly so keep your eye on these. Cool completely before use.

Assembly and Decoration
I wanted a small cake today, so I baked the devil's food in 2 traditional round cake pans and trimmed each layer to size, also leveling the top of each round as I did.  This is optional.  If you choose to trim your cake, do it when the cake is very cool using a long serrated knife.

Prepare your cakes, frosting, coconut and almonds.  Gather some chocolate sprinkles for the center of the flowers, if desired. Frost the bottom layer of cake, covering its top with frosting. Place the top layer of cake and spread the remaining top and sides with frosting.

Plan for where you will place your almond flowers by indenting the frosting lightly in each place.  Insert the almond slices, round end first, in a circle pattern, using 4 to 5 "petals" per flower.  Sprinkle a bit of chocolate sprinkles into the center of each flower.  Adjust stray sprinkles with a toothpick or tweezers.

Using your palms, press handfuls of toasted coconut all around the side of the cakes.  Sprinkle some coconut over the top of the cake.  Use a soft paintbrush to remove shavings from the flowers.

Store your cake covered in the fridge and eat within several days.

Enjoy!
Posted by Created by Hannah Grunzke at 12:23 PM