Rachael from pizzarossa was our lovely June 2013 Daring Bakers’ host and she had us whipping up delicious pies in our kitchens! Cream pies, fruit pies, chocolate pies, even crack pies! There’s nothing like pie! 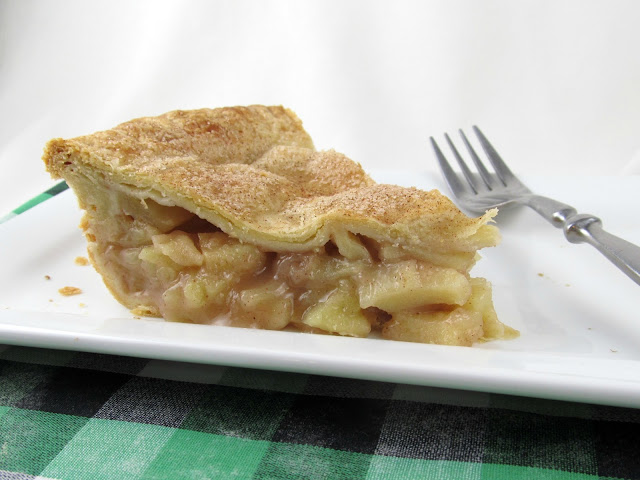 I've only made one other apple pie in my life before this beauty, and it was a ridiculous fail that I was in fear of reproducing with this challenge.  I've been working out my recipe for pie crust, and this one is fantastic.  It uses a mix of butter and shortening, which I've found is the trick to creating the buttery flaky goodness that's really not that easy to achieve unless you're blessed or you've got a good teacher, or you've learned from mistakes.  I'd fall into the latter. The other thing I was missing before this pie was the apple to sugar to flour ratio.  Some apple pies don't call for flour as thickener, but I like the body it gives the filling.  I used a mix of Jonagold and Golden Delicious apples and the flavor is pretty much out of this world, in my opinion.  Note that you can cut some or probably all of the sugar from the filling if you prefer.  I usually go for lower sugar sweets and I think I actually used about 1/2 cup rather than the 2/3 I called for.

Mix flour, sugar and salt in a large bowl. Drop in shortening and quickly grate butter directly into the bowl using a cheese grater. Using your fingers, a fork or a pastry cutter, work butter and shortening into the flour mixture until it's broken down into course, chunky crumbs. Stop mixing when the largest crumb is about the size of a pea.

Using a fork, quickly stir in very cold ice water. Turn the rough dough and crumbs onto a floured surface. Knead just until dough starts to hold together in a rough mass, up to 10 times. Do not over mix! You will be able to see chunks of butter in the dough and this is a good thing.

Divide the dough in half and pat each half into a disk. Wrap each disk in plastic wrap and refrigerate at least an hour before use. The dough will keep in the fridge for a full day, or you may freeze the dough for up to 3 months. Bring back to a thawed chill before rolling.

Roll out 1/4 inch thick using a floured rolling pin on a well-floured surface (flour, flour everywhere!) and use as directed. 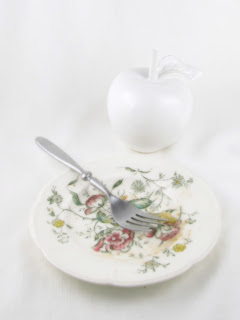 Prepare one recipe of Flaky Double Crust Pie Dough and chill for 2 hours or up to 24 hours.

Preheat oven to 425F. Roll out half of the dough 1/4 inch thick on a floured surface and place the bottom crust of pie dough into an ungreased pie plate. Press the dough gently into the sides and bottom of the pie plate but do not pull or stretch the dough.

In a large bowl, stir together sliced apples, sugar, flour, cinnamon, salt and lemon juice. Reserve about a tablespoon of sugar and a 1/4 teaspoon cinnamon and set aside.  Spoon the filling into the bottom crust. Roll out the top crust and cover the pie with the dough. Using a scissors, trim the dough to overhang about 1/2 inch over the edge of the pie plate. Fold the excess dough around the edge, tucking the top layer under the bottom layer.  Press the edges all the way around the crust using the tines of a fork to seal the crust. Slice narrow vents in a couple places near the center in the top crust.

Brush the top crust with melted butter and sprinkle with the mix of reserved sugar and cinnamon.

Bake for 50 to 60 minutes in the lower third of your oven.  Check the pie after 30 minutes and cover the top of the crust with foil to prevent excessive browning. After 40 minutes, prop the oven door open slightly with the handle of a wooden spoon to help brown up the bottom crust (this works with an electric oven by keeping the bottom heating element on).  Cool the pie for at least 2 hours before serving.

Enjoy!
Posted by Created by Hannah Grunzke at 5:00 AM