Inma of la Galletika was our September 2013 Daring Bakers’ hostess and WOW did she bring us something decadent and delicious! Pastel de Tres Leches or Three Milk Cake, creamy yet airy, super moist but not soggy.. just plain delish! 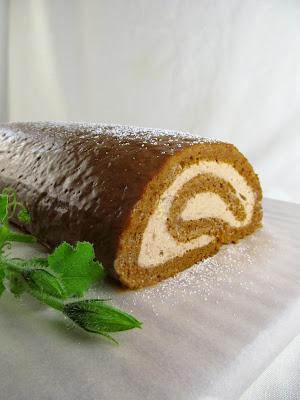 For this month's baking challenge, I made my first ever roulade!  And my first ever Tres Leche... which is a delicious sponge cake that has been soaked with cream, evaporated milk and sweetened condensed milk.  Sponge cake is very sturdy, made with a lot of egg and not much flour, so it holds up very well when soaked with liquid.  The cake really doesn't seem soggy, and when made using pumpkin sponge cake, the creamy texture is reminiscent of pumpkin pie.

My pumpkin roulade cake came out with an amazing creamy, pumpkin pie flavor that was better than I ever imagined.  I glazed the cake with butterscotch ganache and served it in slices with the ganache drizzled over the plate, and that really put the whole thing over the top.  I'd never considered making butterscotch ganache before developing this recipe...it is so easy and delicious!  I can't wait to see what else I can do with it! 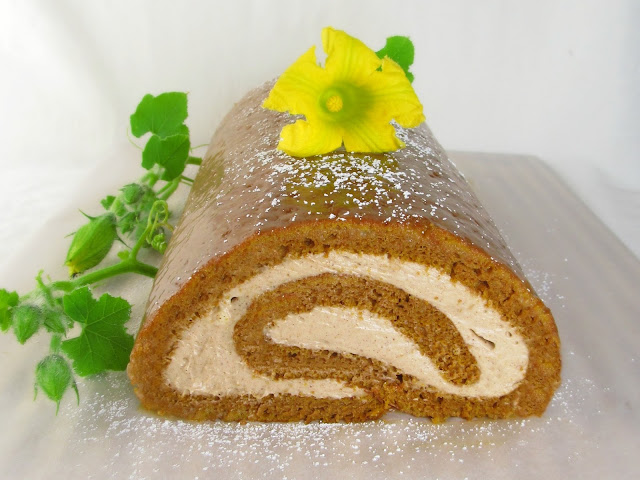 There are many ways to make a three milk cake.  You can find Inma's original Daring Baker's challenge post here for more ideas!

For the Cinnamon Cream Cheese Filling:

For the soaking liquid:

Preheat the oven to 375F. Line a 17x12x1 jelly roll sheet pan with parchment paper that has been buttered on both sides.

In a large bowl, beat egg yolks for about 15 minutes using an electric mixer on high speed until thick and lemon yellow. Gradually add 1/2 cup brown sugar, pumpkin and a pinch of salt, beating on high for a minute until combined well.

In a small bowl, whisk together the flour, baking soda and cinnamon. Gently fold the flour mixture into the pumpkin mixture. Spread into your prepared pan.

Bake for 20 minutes or until the cake is springy and begins to pull away from the sides of the pan. Cool for 5 minutes and run a knife along the edges to release them.  Carefully turn the cake onto a large kitchen towel or pillow case that is dusted with powdered sugar. Gently peel off the paper if it sticks to the cake. Place another towel on the top of the cake. Roll up in the cake in the towels, jelly-roll style, starting with a short side, and cool completely on a wire rack.

In a medium saucepan add the sweetened condensed milk, half and half, evaporated milk and cinnamon stick.  Bring to a boil, reduce the heat and continue to simmer for 5 minutes. Remove from the heat and let it cool.

Once it is cool, remove the cinnamon stick and add the rum or other flavoring.

While the milk is cooling, make the Cinnamon Cream Cheese Filling:

Whisk (vigorously or it will be chunky) milk and flour together over medium heat until it boils and is really thick. Put the pan in a bowl of ice water to cool it completely. Once cool, whisk in the vanilla.

Mix together the butter and cream cheese using an electric mixer on high speed. Add sugar and mix well. Add the cooled milk paste and beat until it combines and fluffs up a bit. It doesn't take long and when it's done it is fluffy with a kind of glossy look to it.  Chill in the fridge while you get ready to assemble the cake. 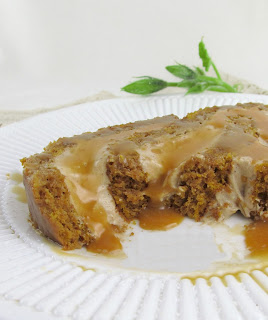 Unroll the cake and remove the top towel. Brush milk liquid onto the cake, not using so much that it soaks all
the way through.  Just wet the top side a bit.

Spread filling evenly over the cake, leaving an inch bare on both of the short edges. Roll up again. Using a skewer, poke holes all over the top of the cake.  Brush a liberal amount of soaking liquid onto the outside of the cake until well moistened.

Place the cake in the fridge for a couple hours, or preferably overnight, covered in plastic wrap, in order to soak up the liquid.

Place the butterscotch chips in a medium bowl.

In a small saucepan, heat cream and butter over medium heat. Pour the liquid over the butterscotch chips just before the liquid comes to a boil. Let it sit for about half a minute and whisk until smooth. Cool until the ganache reaches the thickness you prefer.

Place your chilled cake on a wire rack set over a sheet pan. Pour ganache evenly over the cake. Place in the freezer or fridge to set up for about 15 minutes. Dust with powdered sugar, if desired, before serving in slices, drizzled with warm ganache.

Enjoy!
Posted by Created by Hannah Grunzke at 7:00 AM