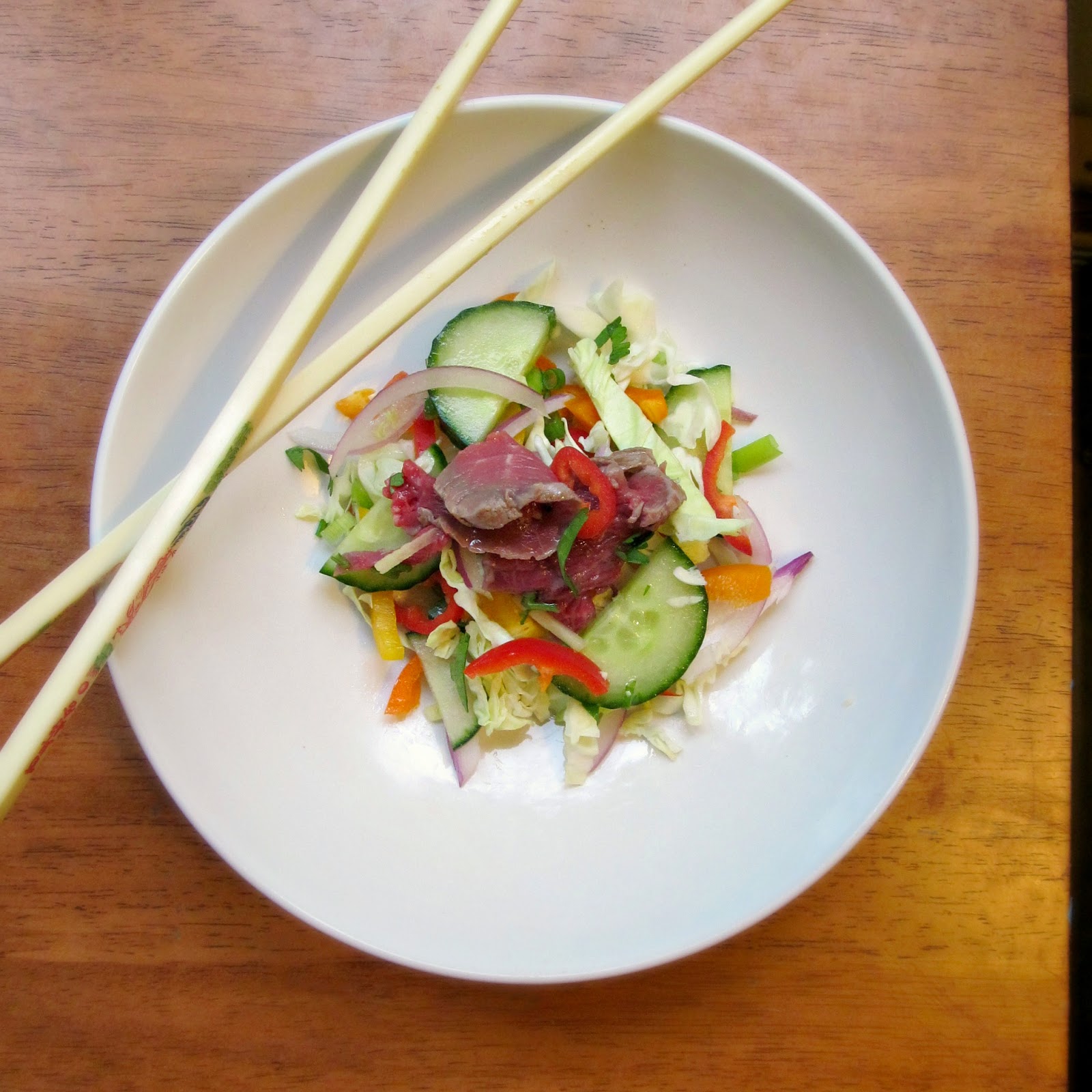 I'm fairly certain that ninety percent of people from the US will be grossed out by this salad because, yes, it's made with raw beef.  Specifically, tenderloin (and there is no better word to describe it than "tender") that's seared for a mere 15 seconds on each side then chilled until it's firm enough to slice wafer thin. 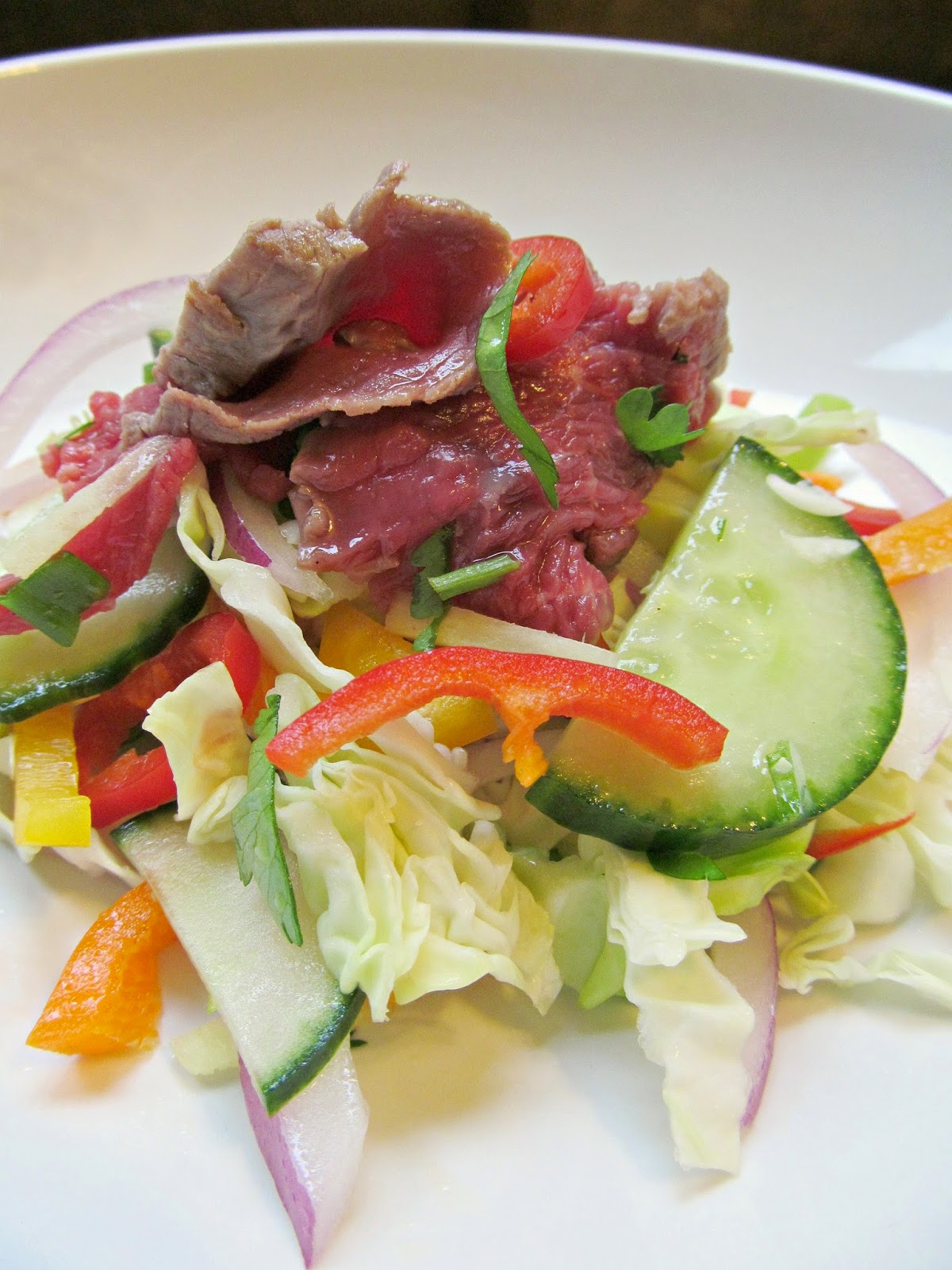 I modified this recipe from one in the Wagamama Restaurant's cookbook.  If you're open to it and looking for a meal that will make you feel like a million bucks, try this!  I loved it better than anything I've ever eaten in a sushi restaurant, and while tenderloin is pricey, the meal cost me about $20 to make.  Compared to the bill at a good sushi restaurant?  Definitely worth the minimal effort it took to make this myself!

The beef is incredibly tender and creamy (similar in texture to tuna sashimi), the flavors are striking yet simple and a portion of salad is quite filling though you can also eat a ton of it, which you may want to do...Especially if you take the time to make the dipping sauce!  Sorry I didn't think to photograph the sauce.  It's brown, thin, punchy, spicy and slightly sweet.  Delicious! 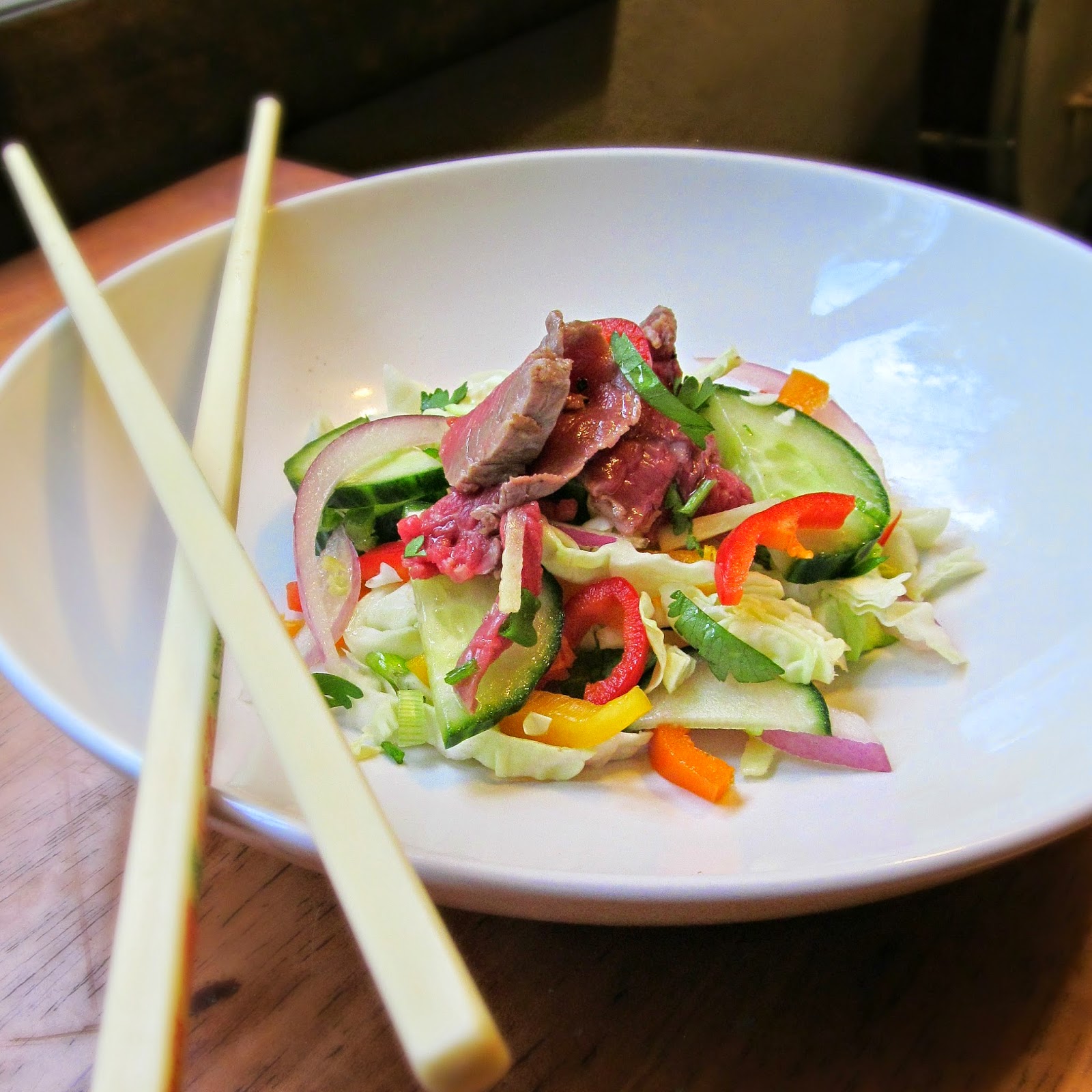 Sear beef in a hot non-stick skillet for 15 seconds on each side.  Run under ice cold water until cool.  Wrap in plastic wrap and chill in the freezer for about one hour.  Slice all vegetables thinly, toss everything but the beef, lime and salt together and place in a large shallow bowl (or a pie plate).  Set this in the fridge to stay cold.

Slice beef thinly once it has firmed up in the freezer. Spread sliced beef over the vegetables.  Squeeze lime over all and give it a pinch of course salt.  Eat with chopsticks.

If desired, dip your bites of salad into a mix of 1/4 cup tamari sauce, 1/4 cup malt vinegar, 1/2 tablespoon sugar, one teaspoon sesame oil, half a sliced thai chili and one small clove minced fresh garlic all of which has been heated just until the sugar dissolves.  If using the sauce, omit the lime and salt.

Posted by Created by Hannah Grunzke at 5:40 PM