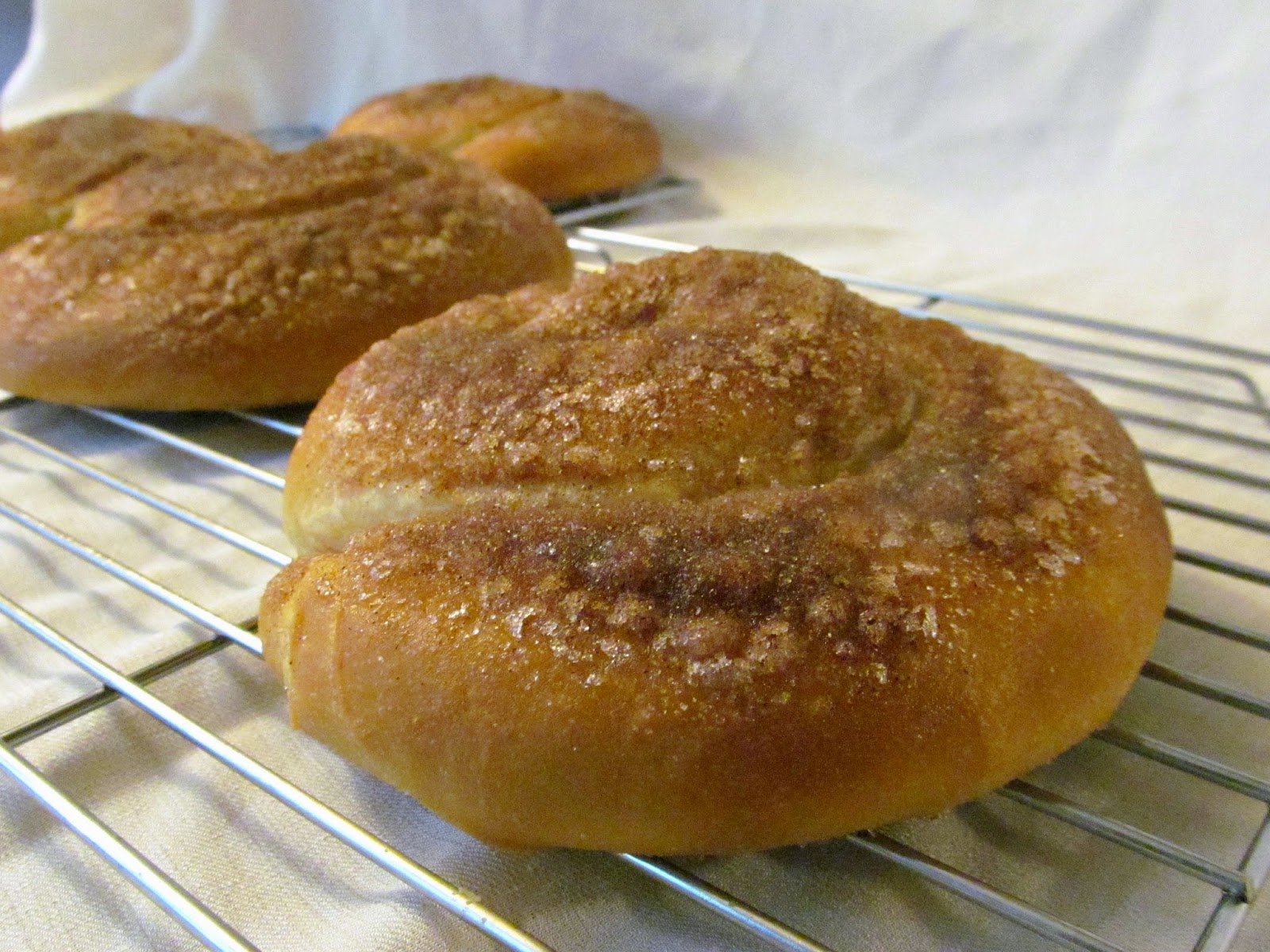 I am so grateful to the Daring Bakers club members for exposing me to foods that I wouldn't otherwise hear of, much less have the pleasure to eat!  The August Daring Bakers' Challenge took us for a spin! Swathi of Zesty South Indian Kitchen taught us to make rolled pastries inspired by Kurtoskalacs, a traditional Hungarian wedding pastry. These tasty yeasted delights gave us lots to celebrate! 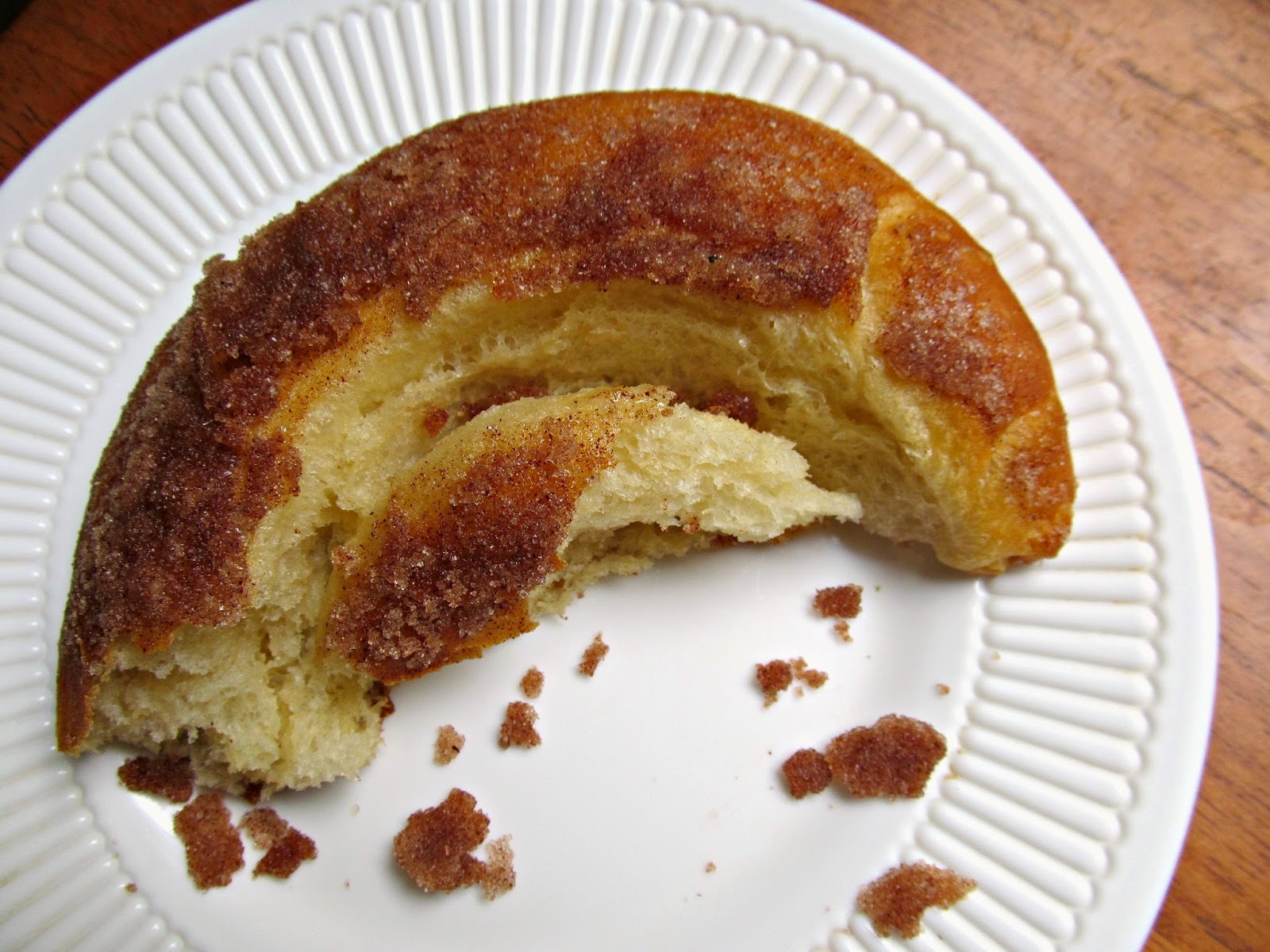 This month, we were offered recipes for a pastry called Chimney Cakes, and also these spiraled rolls called Ensaimadas.  The Chimney Cakes look like a lot of fun!  But basically out of laziness, I only baked the Ensaimadas, which were pretty easy to make and very tasty.  I would compare these to deep fried mini-donuts in flavor and texture.  Even though I tried to "fill" the rolls with cream cheese, it melted into the dough so it gave the rolls a nice flavor and the pastry was very moist.  But there weren't layers of cream cheese in them at all.  I also opted to sprinkle the tops of the unbaked rolls with a thick layer of sugar and cinnamon, and I'm glad I did!  Delicious!  My Ensaimadas were close to authentic but not quite.  Traditionally, they are made with lard (which I did mix with the cream cheese) and doused in powdered sugar after baking.  I am guessing the originals are also reminiscent of doughnuts in texture and flavor.  I also thought of a Churro when eating mine.

For the original Daring Bakers recipes for both chimney cakes and ensaimadas, see here!

Mix the yeast and milk in a small bowl until the yeast has dissolved and let it rest for about 5 minutes or until foamy. In a large bowl, whisk the flour, sugar and salt together. Using a spoon, add the milk and yeast to the flour mixture until the ingredients form a soft dough.  The dough might be slightly dry.  If it is at all soggy and wet, stir in a little flour. Cover the bowl with plastic wrap and place in a warm room or in a cold oven with the light turned on. Allow the dough to rise for about an hour or until the dough has doubled in size.

Using your fingers, stir the egg and oil into the dough until fully incorporated.  The dough will be super sticky and a little chunky.  Turn the dough onto a well floured surface, sprinkle with flour and knead for five minutes.  Add flour as needed, and wash your sticky hands every so often, until the dough is smooth and slightly tacky.  (It also helps to use a putty knife to fold the dough at first until it's not as wet.)  Cover the dough and let it rest for 30 minutes. 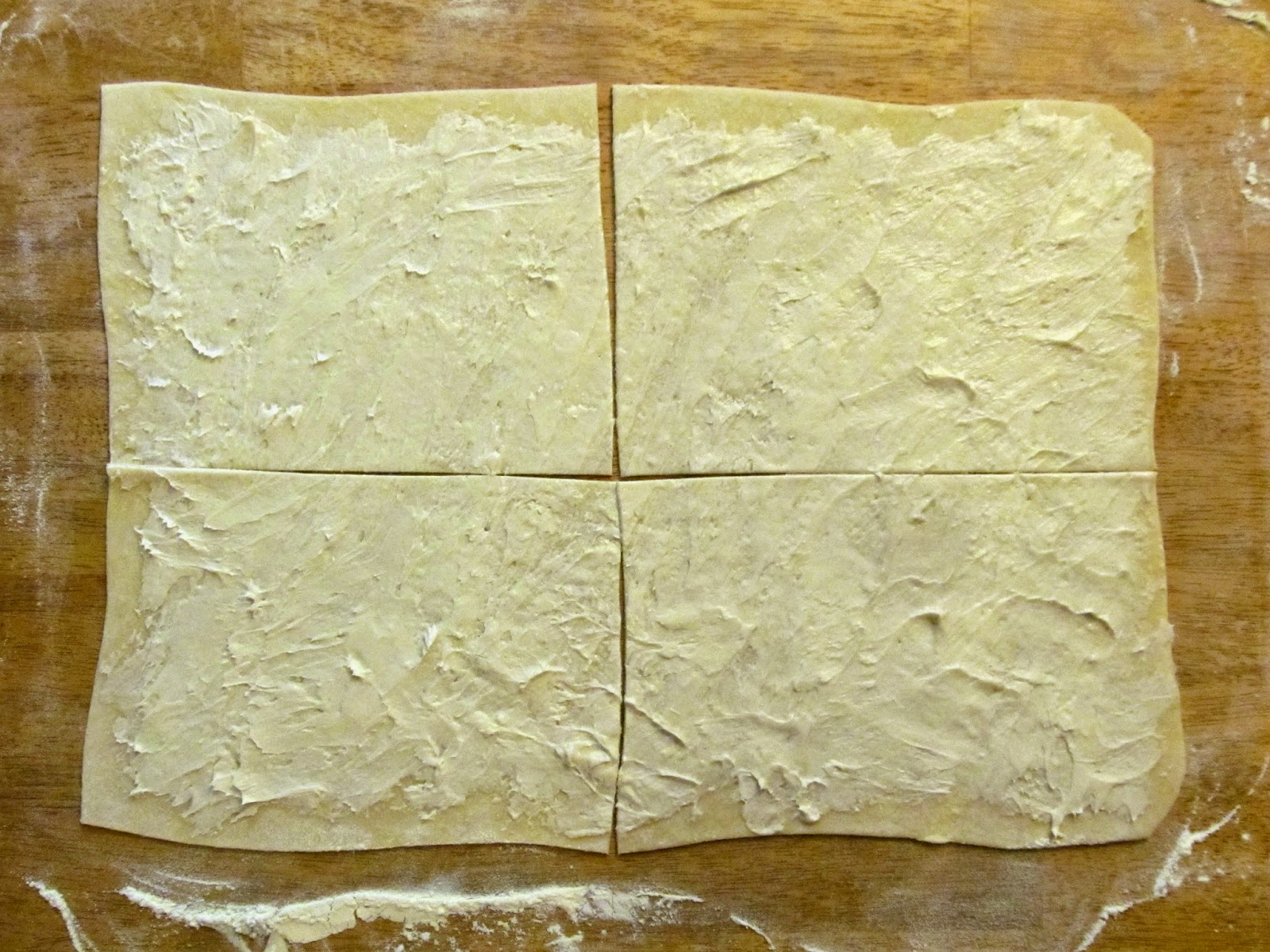 Roll out the dough on a lightly floured surface into a rectangle about 13 inches by 18 inches (trimmed to even out the edges).  In a small bowl, mix together 5 tablespoons of lard, cream cheese and vanilla until blended.  Using your hands, spread this mixture over the dough. Slice the dough into 4 equal sized rectangles, as pictured.

Roll up each rectangle starting on the long side and using your hands shape each piece of rolled dough into a rope about 16 inches long.

Wrap each rope into a loose snail shape on a parchment lined sheet pan (two on each of two large pans) with ample space between them. 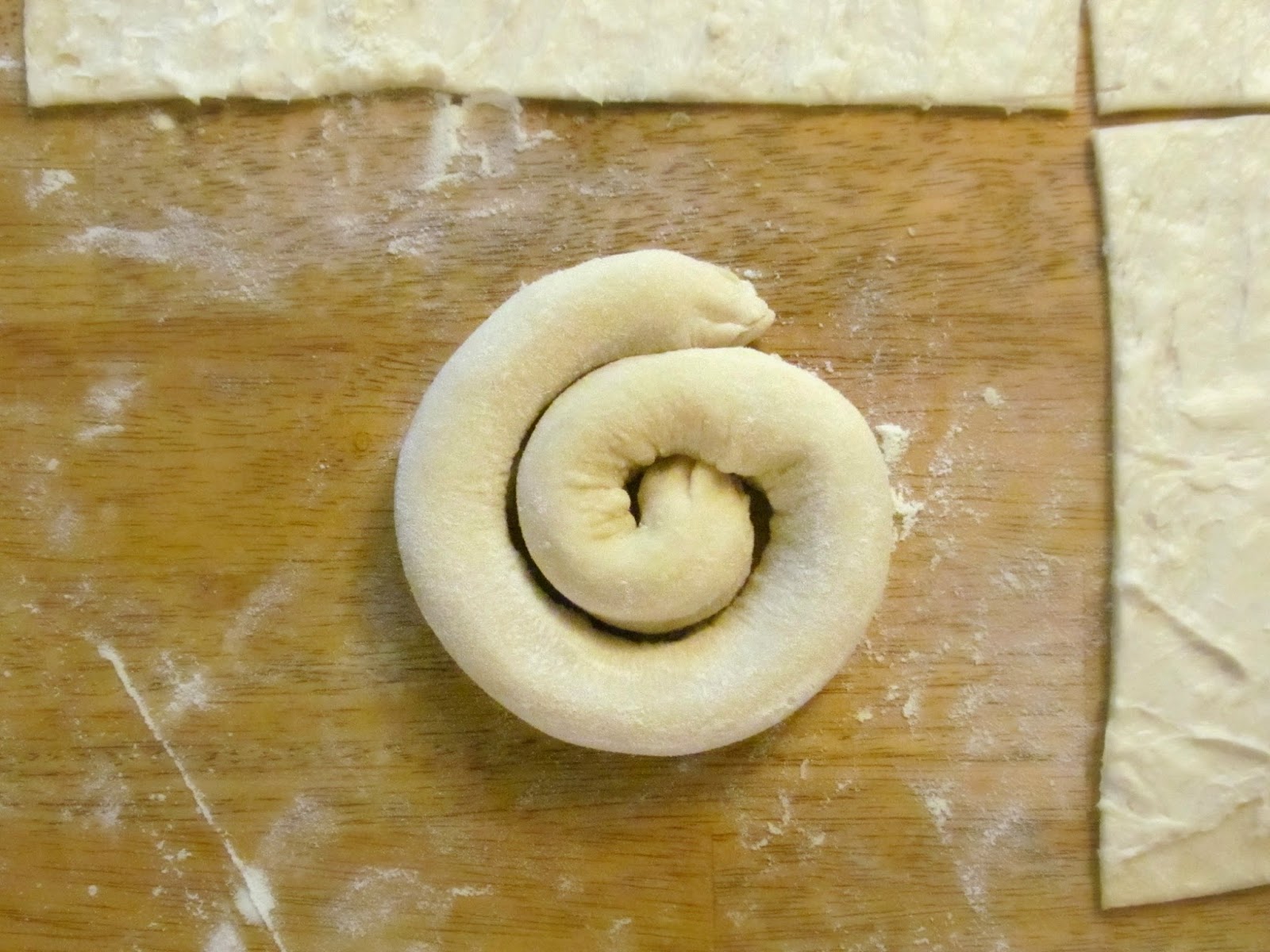 The snail shape should include a bit of space between the coils, as this dough will rise until nearly tripled in size. Cover the rolls and place the sheet pans in the refrigerator overnight.

In the morning, remove the rolls from the fridge.  Leave them sit at room temperature until they are nearly tripled from their original size (or if they already are, you may bake them right away).  Heat your oven to 350F. Brush the top of the ensaimadas with the remaining 2 tablespoons of lard, melted.  Sprinkle the rolls with a mix of sugar and cinnamon.  Bake for 20 minutes, rotating the pans halfway through if you're forced to bake them on two racks. Remove from the oven when browned on top.  Cool on wire racks and serve fresh.
Posted by Created by Hannah Grunzke at 6:00 AM