The October Daring Bakers’ challenge was brought to us by Korena of Korena in the Kitchen. She took us to Austria and introduced us to the wonders of the Sachertorte. 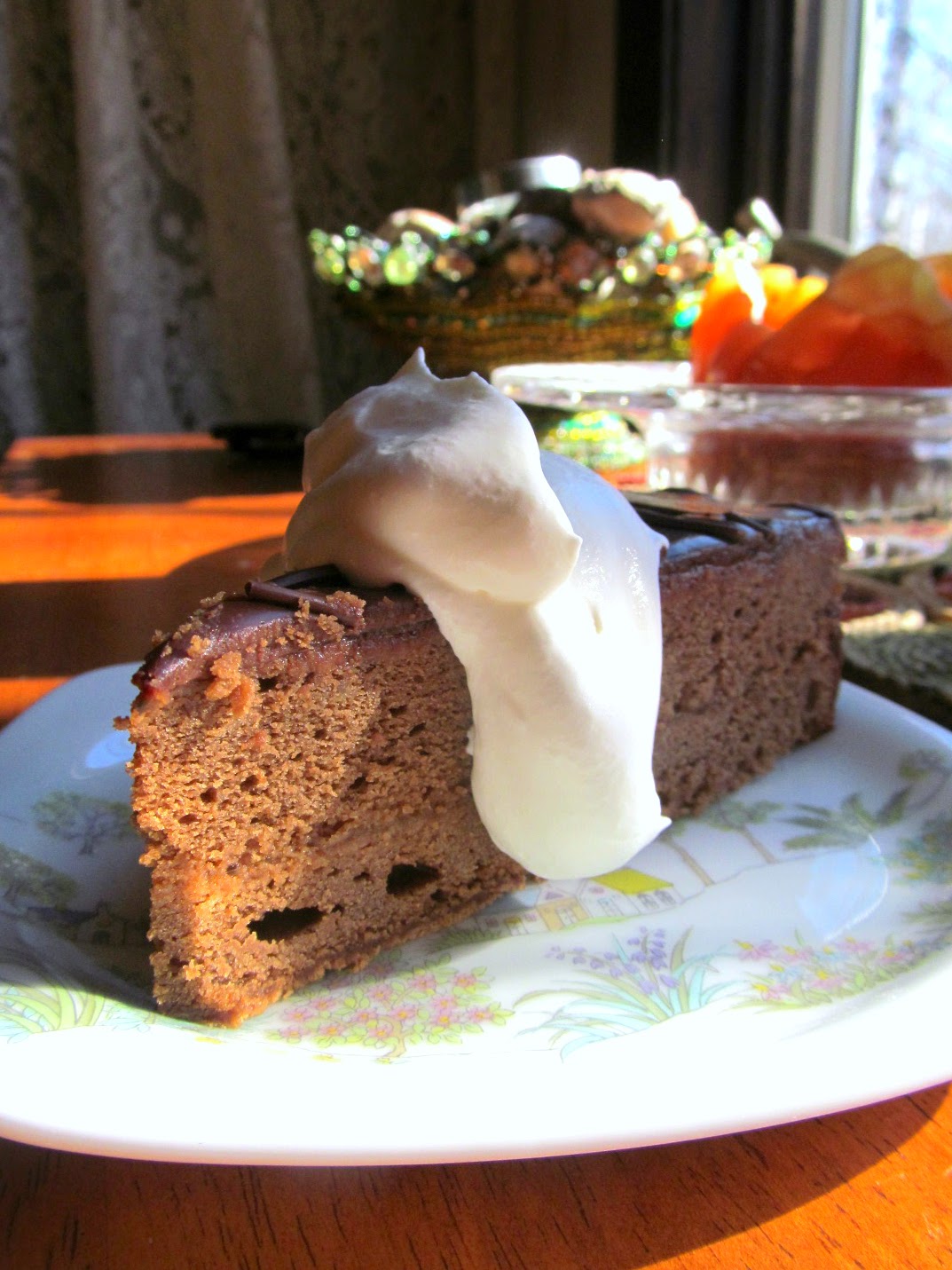 I've made many chocolate cakes in my day, but none quite like this.  This is a real-grown-up chocolate cake.  Dense and not too sweet, lightly flavored with apricot, glazed with more dark chocolate and served with real unsweetened whipped cream.  My daughter Penelope, as I've said before, has highfalutin taste in desserts, so this made the perfect birthday cake for her this week! 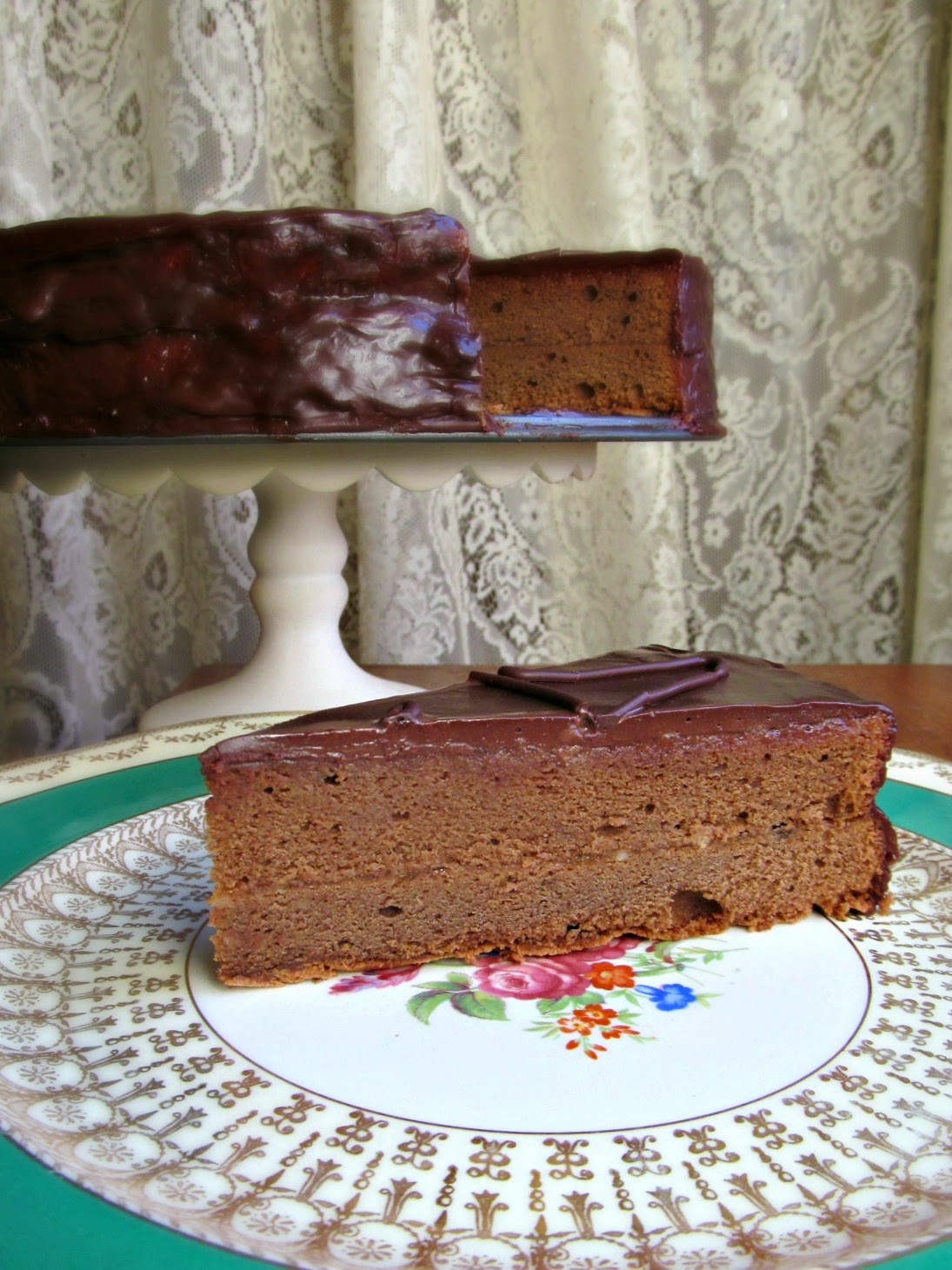 To give you a little history of the Sachertorte (I should be doing that when presenting you with all of these foreign treats, shouldn't I?  I'll start now...)

In 1832, Prince Wenzel von Metternich instructed his personal chef to create a special dessert for several important guests. The head chef, having taken ill, let the task fall to his sixteen-year-old apprentice, Franz Sacher, who was in his second year of training in Metternich's kitchen.  The guests loved the cake and Sacher went on to have a career as a pastry chef.  Sacher's eldest son Eduard carried on his father's culinary legacy, completing his own training in Vienna, during which time he perfected his father's recipe and developed the torte into its current form.  Since then and to this day, the cake remains among the most famous of Vienna's culinary specialties.  And it's a very consistent cake...chocolate sponge cake...apricot...chocolate glaze..the word "sacher" written on top with writing chocolate.  I (for once) changed very little from the original recipe this month, but if you'd like to take a gander at the original Daring Bakers challenge recipe, click HERE!

Directions:
1. Preheat oven to 350°F with a rack in the center of the oven. Butter and flour the sides of a 9-inch spring form pan, then line the bottom with a circle of parchment paper.
2. Place the bittersweet chocolate in a heat-proof bowl and heat over a small saucepan of barely simmering water (make sure that the bowl is not touching the simmering water) or in the microwave until just melted. Set aside to cool completely, stirring often.
3. Place the butter in a large mixing bowl and beat with the paddle attachment of a stand mixer or electric mixer on medium speed until very light and creamy. Add the powdered sugar on low speed, then increase to medium speed and beat again until light and creamy.
4. Beat in the egg yolks, one at a time, scraping down the sides of the bowl.
5. Add the cooled chocolate and vanilla and beat until well-mixed and very light and creamy, scraping down the sides of the bowl.
6. In a very clean bowl using the whisk attachment, beat the egg whites with about one tablespoon of the granulated sugar on high speed until foamy. Gradually add in the rest of the granulated sugar and continue beating the whites until they form soft, shiny peaks.
7. Vigorously stir about 1/3 of the whipped egg whites into the chocolate mixture to lighten it, then gently fold the remaining egg whites into the chocolate mixture with a spatula until just a few streaks of egg white remain. Be careful not to deflate the egg whites.
8. Stir together the flour and salt and sift half of it over the chocolate mixture. Fold in with a spatula until almost incorporated. Sift over the remaining flour and fold to combine completely.
9. Spread the batter evenly in the prepared spring form pan.
10. Bake in the preheated oven for 35-45 minutes or until a toothpick inserted in the middle comes out clean.
11. Cool in the pan for 10 minutes, then run a knife around the edge to loosen it from the pan and remove the sides. Carefully invert the cake onto a rack and remove the bottom of the pan and parchment paper, then turn the cake right-side up onto a rack and allow to cool completely.

12. Assembly: Turn the cake upside-down so that the perfectly flat bottom of the cake is now the top. Cut the cake horizontally into 2 even layers.
13. Place one layer of the cake on a cardboard cake round (or the bottom of the spring form pan) and spread generously with about half of the apricot glaze. Allow it to soak in.
14. Place the second cake layer on top and spread the top and sides with the remaining apricot glaze. Work quickly before the glaze has a chance to set and use a metal offset spatula to smooth the top. Place the cake on a rack set over a plate or baking sheet lined with waxed paper and allow the apricot glaze to set.
15. Make the chocolate glaze and pour it over the top of the cake, first around the edge and then in the middle. Spread the excess glaze over any bare spots using a metal offset spatula. Before the glaze has a chance to set, move the cake to a serving platter.
16. With the writing chocolate, pipe the word “Sacher” in the middle of the cake and add any decorative flourishes you wish. Chill the cake until the glaze is completely set, at least 1 hour.
17. To serve: Whip the heavy cream to soft peaks (this is best done in a cold bowl with cold beaters).
18. Cut the Sachertorte into wedges with a large sharp knife dipped in hot water and wipe off the blade between cuts. Serve each wedge of cake with a large dollop of whipped cream.

Directions:
1. Boil the jam and rum/water in a small saucepan over medium heat.
2. Cook, stirring often, until the mixture thickens and drips slowly from the spoon, about 2-3 minutes.
3. Strain through a wire mesh sieve, pressing firmly on the solids. Use while warm.
*I used low sugar jam and I think it prevented my apricot syrup from setting up properly.  When I poured my chocolate glaze over the cake, the jam/syrup slid off which is why the sides are all lumpy.  Usually sachertortes are beautiful and smooth!

Directions:
1. Place the sugar, corn syrup and water in a small, heavy-bottomed saucepan over medium-high heat and bring to a boil, stirring occasionally.
2. Attach a candy thermometer, reduce the heat to medium and cook, stirring, until the mixture reaches 234˚F, about 5 minutes.
3. Remove the saucepan from the heat and whisk in the chocolate. The glaze should be smooth and shiny and a little thicker than Hersheys syrup.  If needed, whisk in little bits of chocolate while hot until it's the consistency you are looking for.  Use immediately once it hits the right thickness. 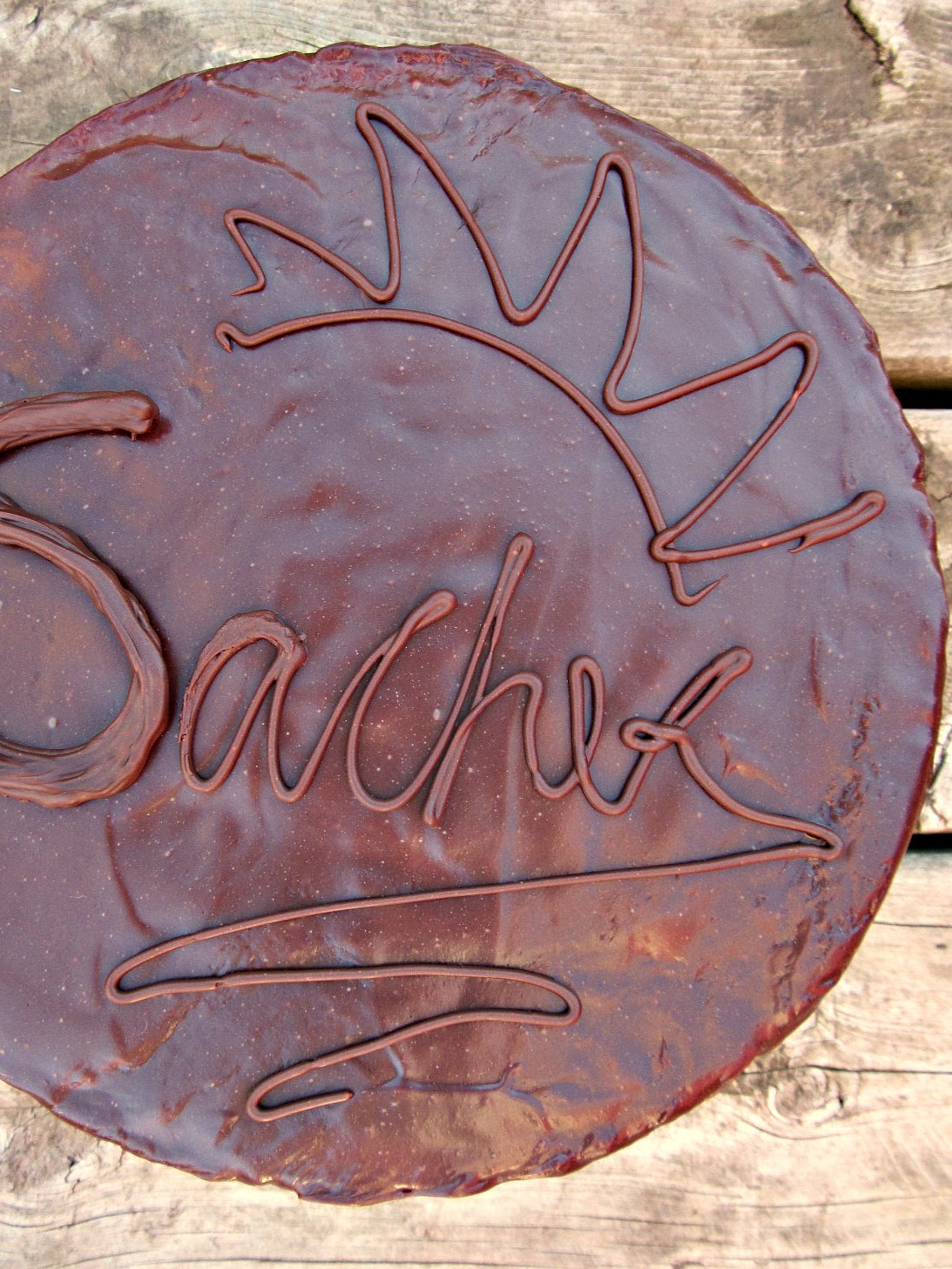 Directions:
1. Heat the chocolate until just melted, then stir in enough vegetable oil to get a pipeable consistency. If necessary, let the chocolate mixture cool slightly to thicken so that it is not too runny, or whisk in a pat of room temp butter to thicken.
2. Place the chocolate in a piping bag with a tiny tip or use a small Ziplock bag and snip off the corner to make a small hole.  Practice writing on waxed paper before writing on the cake.

Posted by Created by Hannah Grunzke at 9:21 AM