You may recall Run Smelt Run 2012, which was the first annual second line parade event in Duluth, courtesy of the Magic Smelt Puppet Troupe and the Brass Messengers.  Our second annual smelt parade was definitely colder...a little wetter, kind of slushy and windy, and in spite of it all...even more festive and awesome than last year!  SO much fun.  If you're looking into whether you want to brave next year's event, yes, you do! 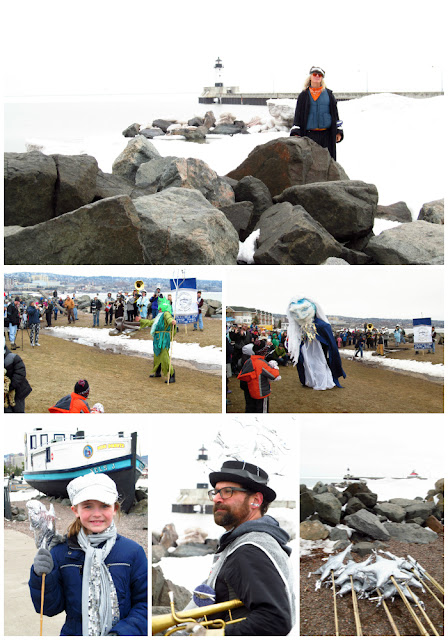 The parade began under the Arial Lift Bridge, where we were greeted by Neptune before we heartily booed out Old Man Winter and watched the Smelt Queen bash him with her tail.  Parade goers festively donned their silver flare, much of which was costuming created through a series of workshops hosted by the Magic Smelt Puppet Troupe throughout the last month. 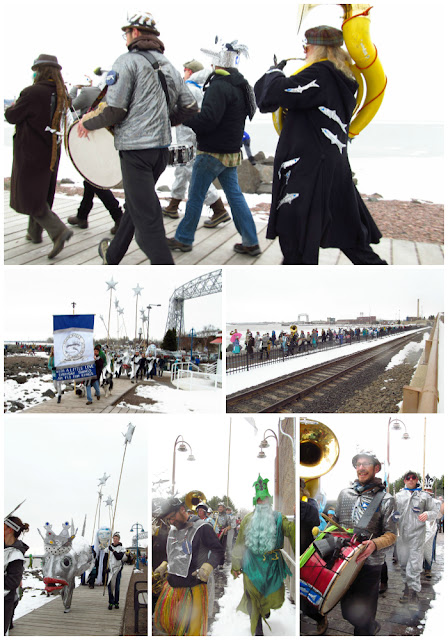 The procession moved up Duluth's shore, led by the Brass Messengers, a Twin Cities band that is so much fun, we bought both of their CDs at last year's event.

The night had just begun by the time we arrived at the Zeitgeist Cafe for a little street dancing, playful human puppet plays...and lots of smelt, both in the form of a delicious smelt fry and the silver fish puppets that we used as just another excuse to dance.

And as I write this, it snows...Think warm thoughts for us and we hope to see you at next year's event!

Posted by Created by Hannah Grunzke at 3:52 PM