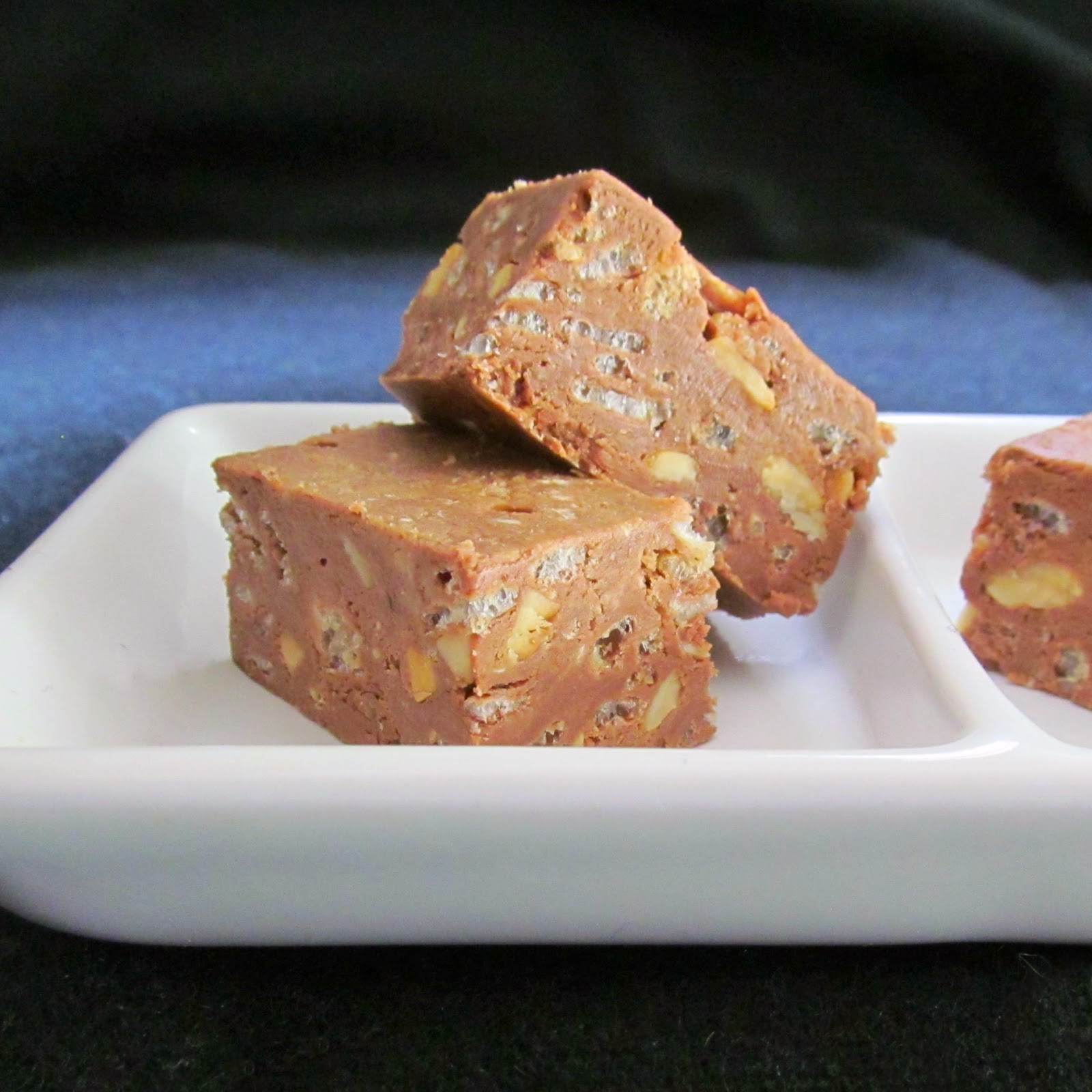 The March 2014 Daring Bakers' challenge was hosted by Rebecca of BakeNQuilt. She challenged us to learn to make classic nougat and to make it our own with our choice of flavors and add-ins. 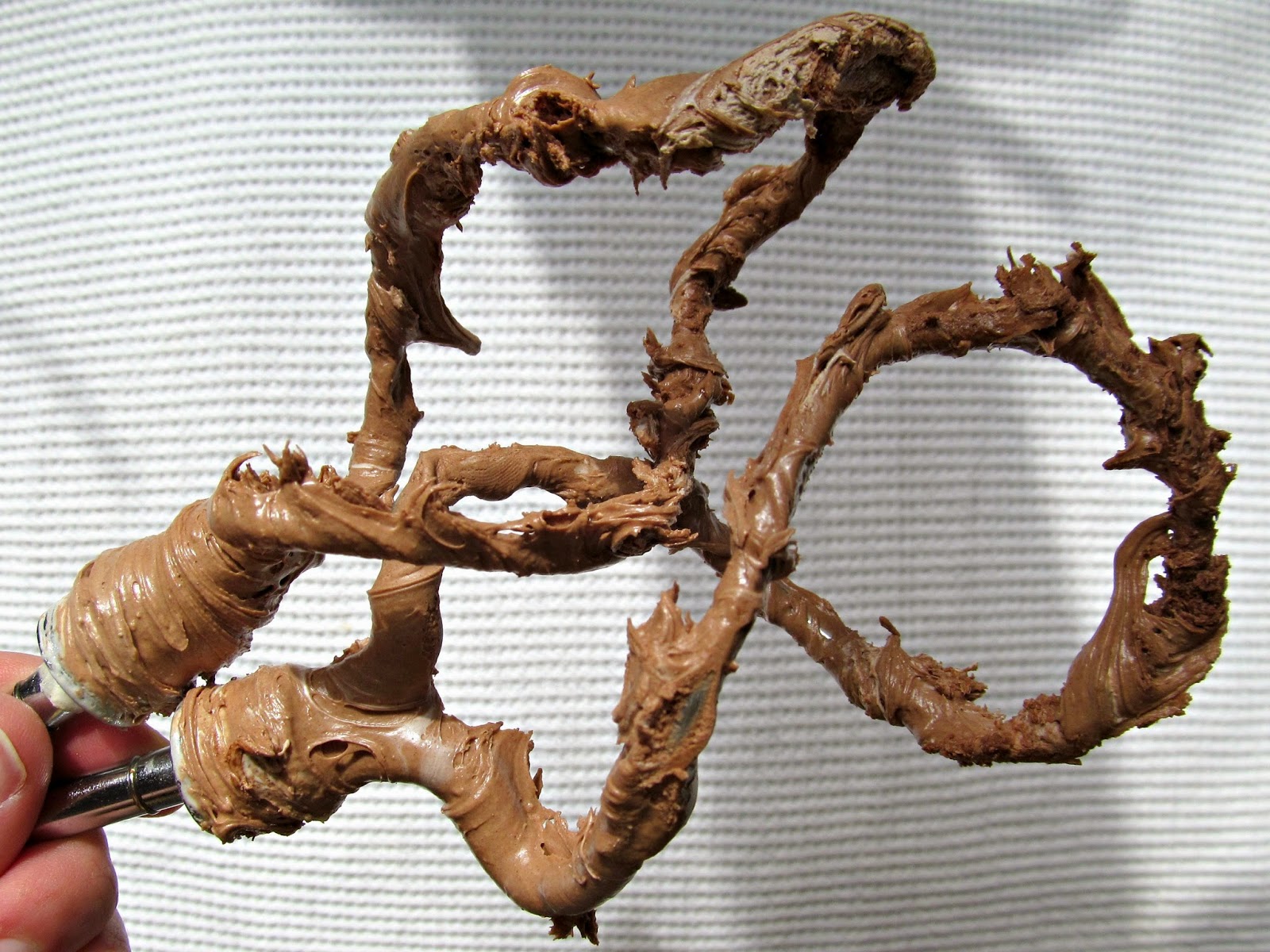 Candy making definitely scares me!  It requires such precision to achieve the desired texture, and an error that results in a complete waste of time isn't out of the realm of possibility.  But I was excited at the idea of making something that resembled the center of a 3 musketeers bar.  You can see on the beaters, it kind of does, doesn't it?  I swirled dark chocolate, krispies and crunchy peanut butter through my nougat, and the flavor was awesome!

For as daunting as the task seemed, this project was not that difficult.  If I didn't have a few little nippers at my heels, I would definitely have covered this nougat with a layer of caramel and glazed little bite sized bars with tempered chocolate.  Let's not, but imagine we did :)  Yum! 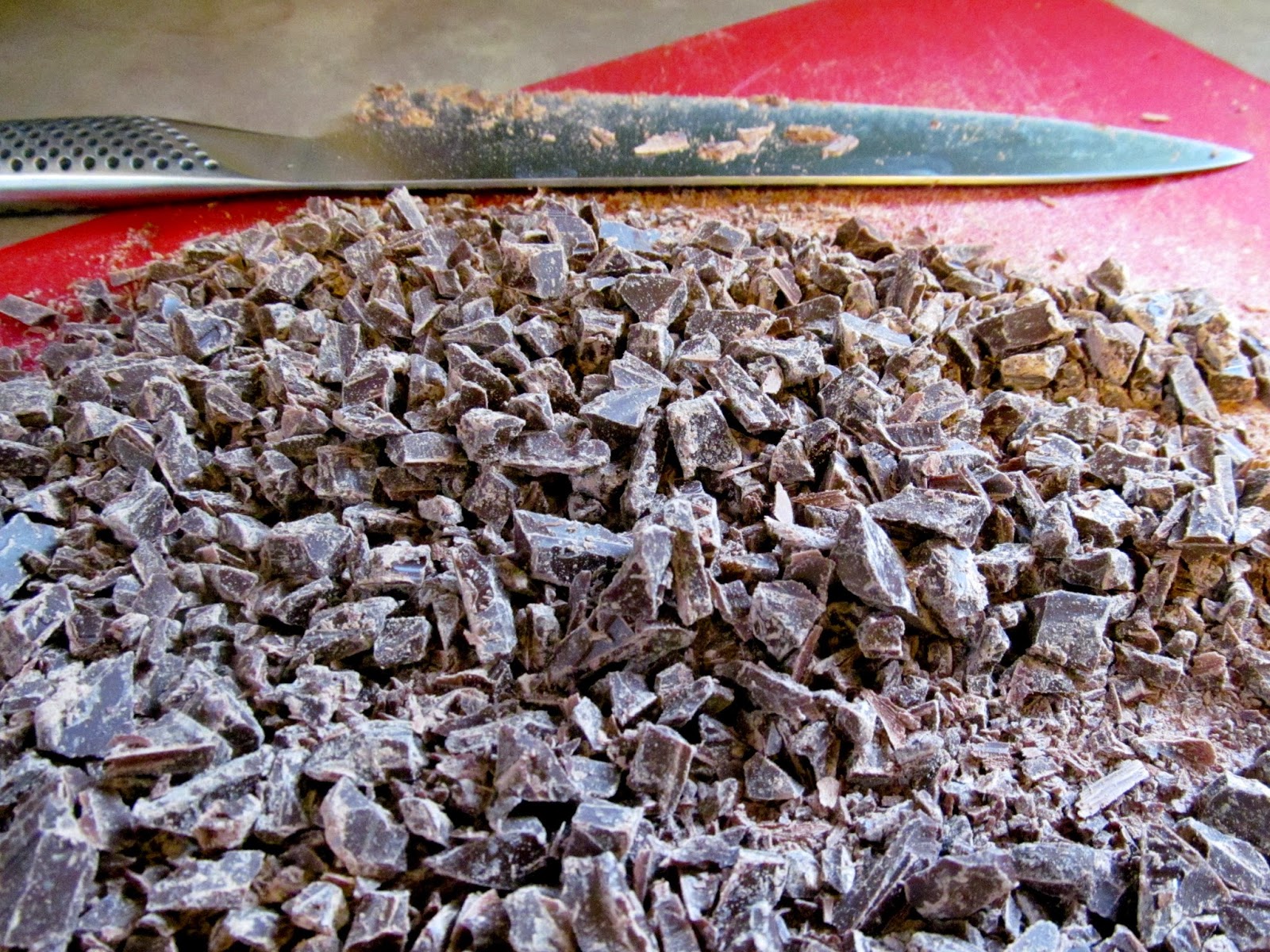 Notes:
This project is kind of a big one, though certainly not out of your league as long as you have a candy thermometer and an electric mixer. And it doesn't really take that long to accomplish. It might go smoothest if you have a helper. Especially if you don't own a stand mixer.


Be sure to use a stand mixer with a very large bowl. Or use a hand held electric mixer with a large bowl and a second set of hands. A small or medium bowl won't do.

Also, read the recipe all the way through before starting. Maybe read it twice.

And see here for the original Daring Baker's challenge recipes!

Combine the sugar, water and ¼ cup of corn syrup in a 2 quart saucepan and set it aside.Place the egg whites in the bowl of an electric mixer with the whip attachment but don't start mixing yet.

Combine the honey and 2 tablespoon of corn syrup in a small saucepan on medium-high heat. The honey mixture will foam up and grow to about 3 times the starting size so make sure your pot isn't so small that it will overflow. Attach a candy thermometer.

While beating the whites on high, slowly stream the hot honey mixture down the inside of the mixing bowl and into the whites. Do not pour it directly on the whites or they may collapse. Keep beating on medium-high speed. 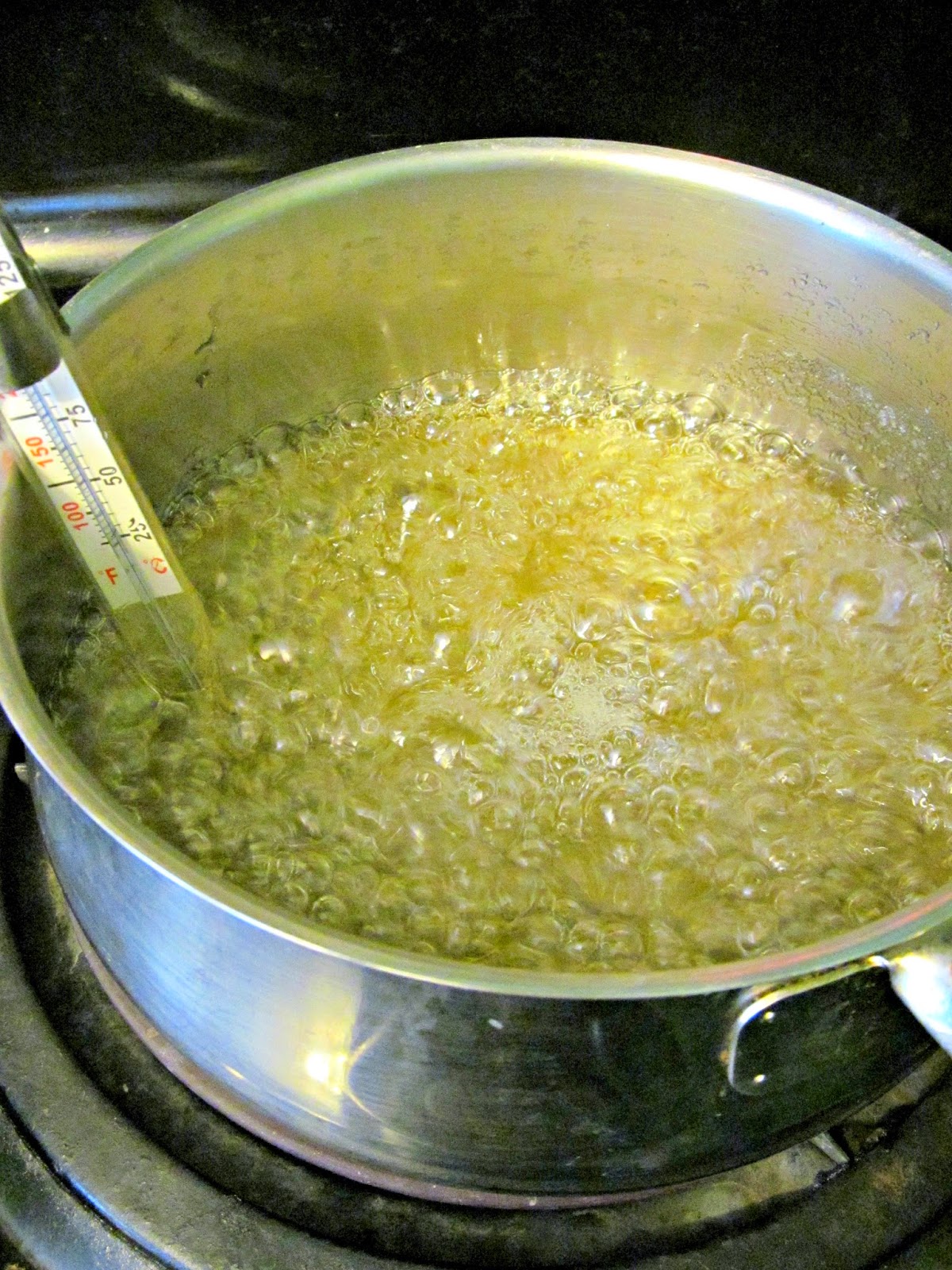 As the sugar mixture starts to bubble, dip a pastry brush in water and brush the sides to remove any sugar crystals. Alternately, you can put on a lid on the pot for a couple of minutes once it’s bubbling and let steam do the job for you.

Attach the candy thermometer. When the sugar mixture reaches 310°F, turn the mixer back up to high and slowly pour the syrup into the egg whites in a slow stream down the inside of the bowl. Do not pour the syrup directly on the whites or they may collapse.

Once the sugar syrup is incorporated, continue beating for 3 to5 minutes until the whites feel warm, not piping hot (if your mixer bowl is metal, the bowl will still be hot even when the whites have cooled some).

Add the chocolate and beat on high until the chocolate is combined. The heat from the egg mixture will melt the chocolate. (At this point, I realized my mixing bowl wasn't nearly big enough so I had to mix in the chocolate by hand, which is why there are white streaks in my candy)

Stir in the krispies until incorporated. Then pour in your peanut butter and stir peanut butter throughout the chocolate without mixing it completely smooth.

Pour the mixture into the prepared pan and spread it in an even layer.

Let it sit for 24 hours at room temperature, uncovered.

Invert the nougat onto a cutting board and remove the parchment paper. Cut as desired.

Store in an airtight container in a cool, dry place for up to 2 weeks. The texture of the nougat will soften a little after a couple of days.

Most nougat improves in texture after a day or two and will keep up to two weeks at room temperature in an airtight container. Nougat should be stacked in layers with parchment in between to prevent sticking on the cut edges. 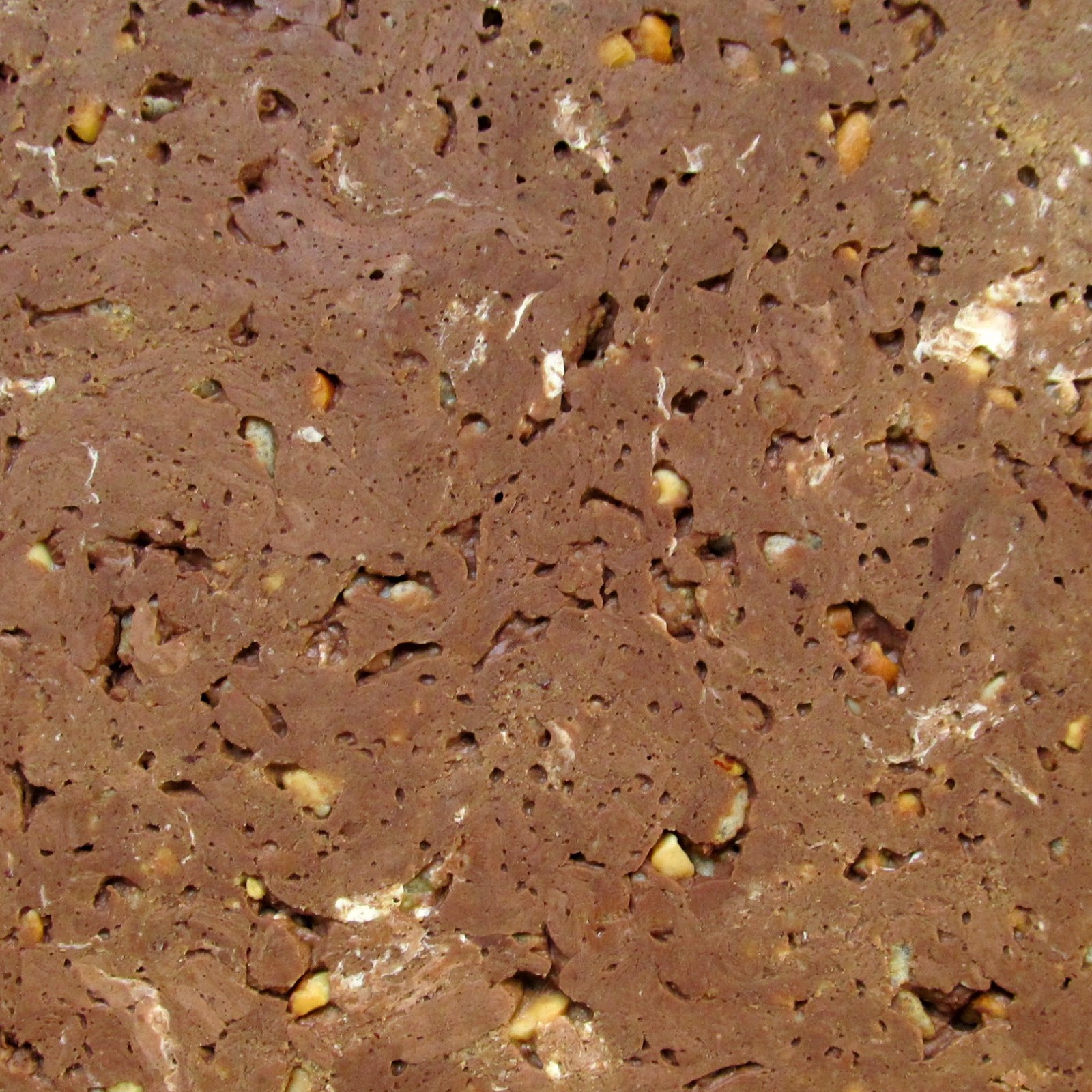