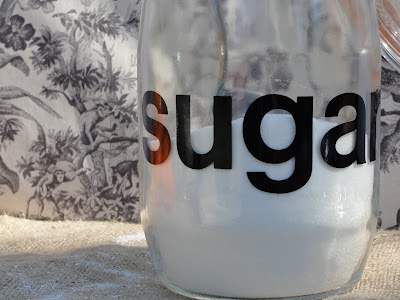 As a newbie, this Daring Bakers challenge terrified me!  I was not totally off base in my concern -candy making certainly is a trip!

The August 2011 Daring Bakers’ Challenge was hosted by Lisa of Parsley, Sage, Desserts and Line Drive and Mandy of What the Fruitcake?!. These two sugar mavens challenged us to make sinfully delicious candies! This was a special challenge for the Daring Bakers because the good folks at http://www.chocoley.com offered an amazing prize for the winner of the most creative and delicious candy!

From my limited experience, candy making seems to be a test of one's ability to remain on their feet, remain patient and be methodical. Which isn't necessarily the most fun, but there's an addicting reward when your done.


These are my chosen candies in their final form: 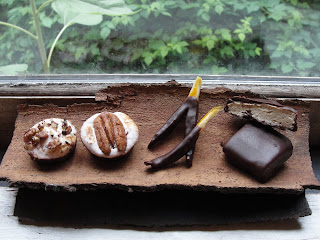 Because I have always wanted to make my own marshmallows and what better candy to put inside chocolate? I absolutely love tea and to make my own Chai concentrate was a joy. And I had a jar of preserved lemons from a previous post pickling in my fridge, and I've been looking for an excuse to eat the last few like candy. 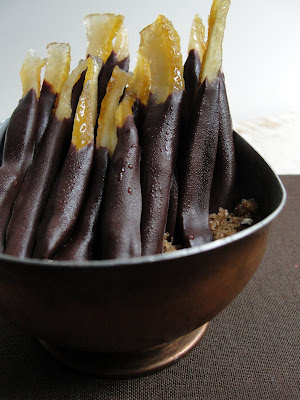 Preserved lemons are a savory Moroccan pickle that I have fallen in love with. I pickled mine in salt and lemon juice with bay leaf, clove, and black pepper (as seen here). It was the perfect citrus rind to use for a unique and perfectly balanced candy.

These candied preserved lemon peels are sweet, sour, salty and bitter - so good. They turned out to be my favorite sweet treat of the 3 candies I made.

I found my marshmallow recipe on a David Lebovitz post. His tips have been extremely valuable to me and I read his blog semi-religiously. I've had this recipe on my list of things to try since I stumbled on it. Creating marshmallows was the easiest stage of the whole candy making process and they were so amazing I doubt I'll buy a marshmallow from the store again! 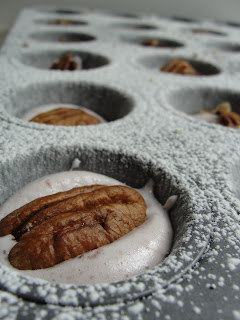 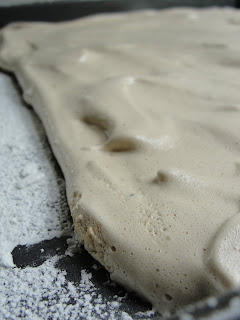 I used David's recipe exactly as written but added my own flavors at different stages for each, then coated the marshmallows in tempered chocolate. 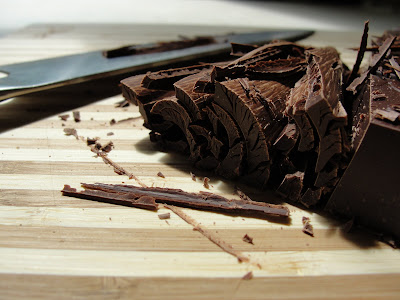 Tempering the chocolate was a very new experience for me. I used a marble slab that I literally borrowed from an end table in my kid's room (after removing its coat of crayon and nail polish). My bench scraper is a big putty knife that I managed to clean of all paint and plaster. And just like on TV, I melted it down, scraped and folded it in circles, etc...It took a really long time as the day was hot and humid, but it worked. My end result was a glossy chocolate that had a great snap to it. Whew. 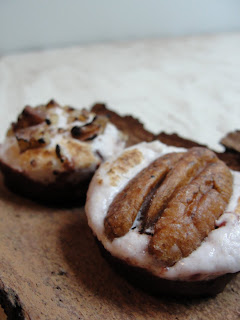 For the cherry pies, I formed them in a mini-muffin tin, topping the marshmallow with pecans when wet. One day later I dipped each in chocolate half way to create the chocolate crust. Toasting the tops with a blow torch might seem like overkill - but the flavor was completely awesome! 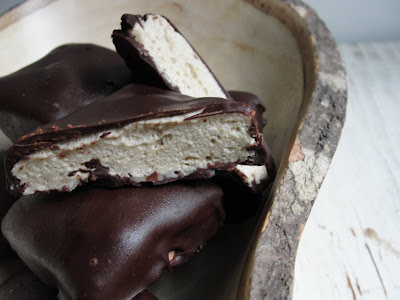 The chai tea marshmallows have a mixture of brown sugar, black pepper and cardamom folded into the finished marshmallow fluff. The smell and taste of the pepper and cardamom together is perfect. The semi-sweet chocolate on the bonbons is dark but sweeter than that on the lemon peels. I happen to be a die-hard dark chocolate fan but I imagine these would be really nice in milk chocolate as well.


Read on for instructions on the creation of these candies... 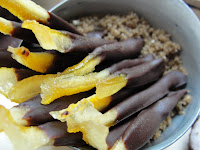 I began my candy making adventure by rinsing and slicing the preserved lemon peels. I soaked them in simple syrup for hours, then rolled them in super fine sugar. I dried them in the open air for a day or so, before completing the drying process in a 250F oven for an hour. After they appeared glazed and were a balance of chewy and tender, I removed the rinds from the oven and cooled them completely. I then dipped them 3/4s deep in a tempered bittersweet chocolate and let them cool on parchment paper in the fridge. 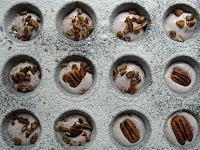 I used this recipe by David Lebovitz when making my marshmallows. For the cherry marshmallow, I made the basic recipe exactly as written, then folded 1 cup of cherry preserves into the marshmallow fluff before it set. One thing I learned: When he says use one part each corn starch and powdered sugar to keep everything from sticking, he means make a huge bowl full of it, throw it everywhere, in mass quantities, and still expect some stickiness to happen here and there. It was messy! Though, not as messy as the chocolate, which still plasters corners of my kitchen and dining room.

I formed my cherry marshmallows in mini-muffin tins, custard cups, and on a sheet pan. I didn't have enough non-stick powder mix on my custard cups so those ended as a snack along the way, but the rest turned out well (literally). When the fluff was wet, I sprinkled pecans pieces that I had tossed in cinnamon on the fluff. The next day the pecans were well set into the marshmallow. One thing to note is marshmallows don't rise or shrink at all when setting. What you see in the fluff is what you'll get.

For the final candies, I dipped the mini marshmallow muffins half way in tempered chocolate and cooled them on parchment paper in the fridge. Once everything was set and done, I toasted the tops with a propane torch and the results exceeded my expectations in how popular they'd be with my tasters! These were the top rated candy of the week.

Brown Sugar and Black Pepper Laced Chai Tea Marshmallow Bonbons:
The Chai tea marshmallows were made a little differently. I used the same marshmallow recipe as the others, but in place of water for blooming the gelatin, and in place of water when melting the sugars, I used a homemade Chai tea concentrate. After the fluff was made, I folded in one cup of brown sugar mixed with one tablespoon black pepper and one tablespoon ground cardamom. Once this mix was swirled through the fluff, I turned it onto a powdered sheet pan. The next day, I cut these with a powdered knife into two-bite sized squares before dipping in tempered semi-sweet chocolate. 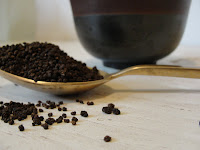 6 whole cloves
One inch piece of peeled ginger, sliced thin
2 cinnamon sticks
3 whole cardamom pods
1 teaspoon roughly cracked black peppercorns
Place all components in a lidded pint jar and place in fridge over night. Feel free to give them a turn or a shake every so often. Before use, strain through a coffee filter.

Note: At all stages in the marshmallow making process, do use liberal amounts of your cornstarch powdered sugar mix. Once your marshmallows have set and you've pulled them out of their forms, you'll need to toss them in the powder again and shake off the excess before moving forward.


And here's how I tempered my chocolate - the longest and scariest part of my candy making journey...

Tempering Method: On marble or granite
Tools: Marble slab, bench scraper, dipping forks and digital thermometer
Tempering Range:
Dark: 113°F-122°F > 80.6°F > 89.6°F
Chocolate is melted and heated until it reaches 113°F. It is then poured onto a marble surface and moved around the surface with a scraper until it has thickened and cools to 80.6°F. Once cooled it is then put back into the bowl over heat to bring it back up to 89.6°F. It is now ready for using in molds, dipping and coating.
Tempering using a marble surface:

While the procedure takes as long (or longer) as it seems in print, my chocolate tempering process went pretty smoothly. The end result, as far as I know, was good for a first-timer.

I wondered if the melted chocolate would melt my marshmallows as I dipped, but this didn't happen. The chocolate dipping process was a mess and I learned to use parchment lined baking sheets instead of metal racks. The chocolate stuck to everything but parchment.

With one quick search, you will find many candy making recipes, tips and procedures. With some common sense and a good deal of patience, you can easily turn any recipe into a creative (messy, and wonderfully delicious!) process. 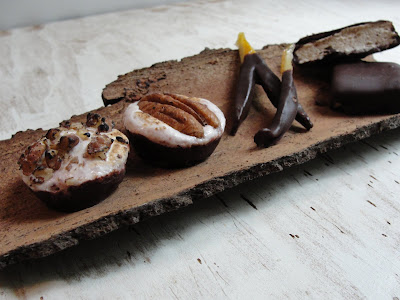 Enjoy!
Posted by Created by Hannah Grunzke at 12:00 AM