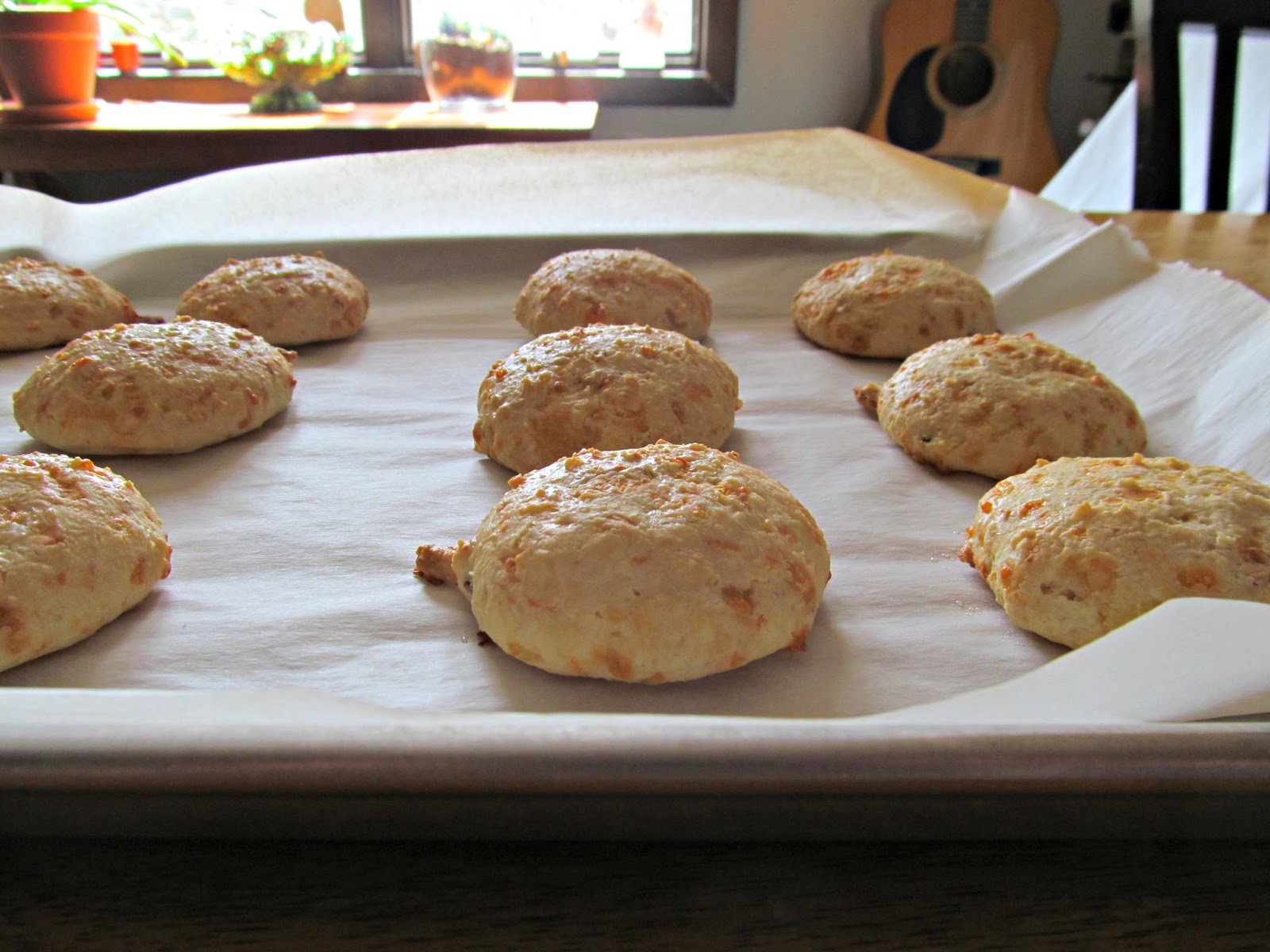 This month's Daring Bakers' Challenge took us on a trip to beautiful Brazil! Renata of "Testado, Provado & Aprovado!" taught us how to make Pao De Queijo, tasty cheese buns that make the perfect snack or treat, and that will make your taste buds samba! 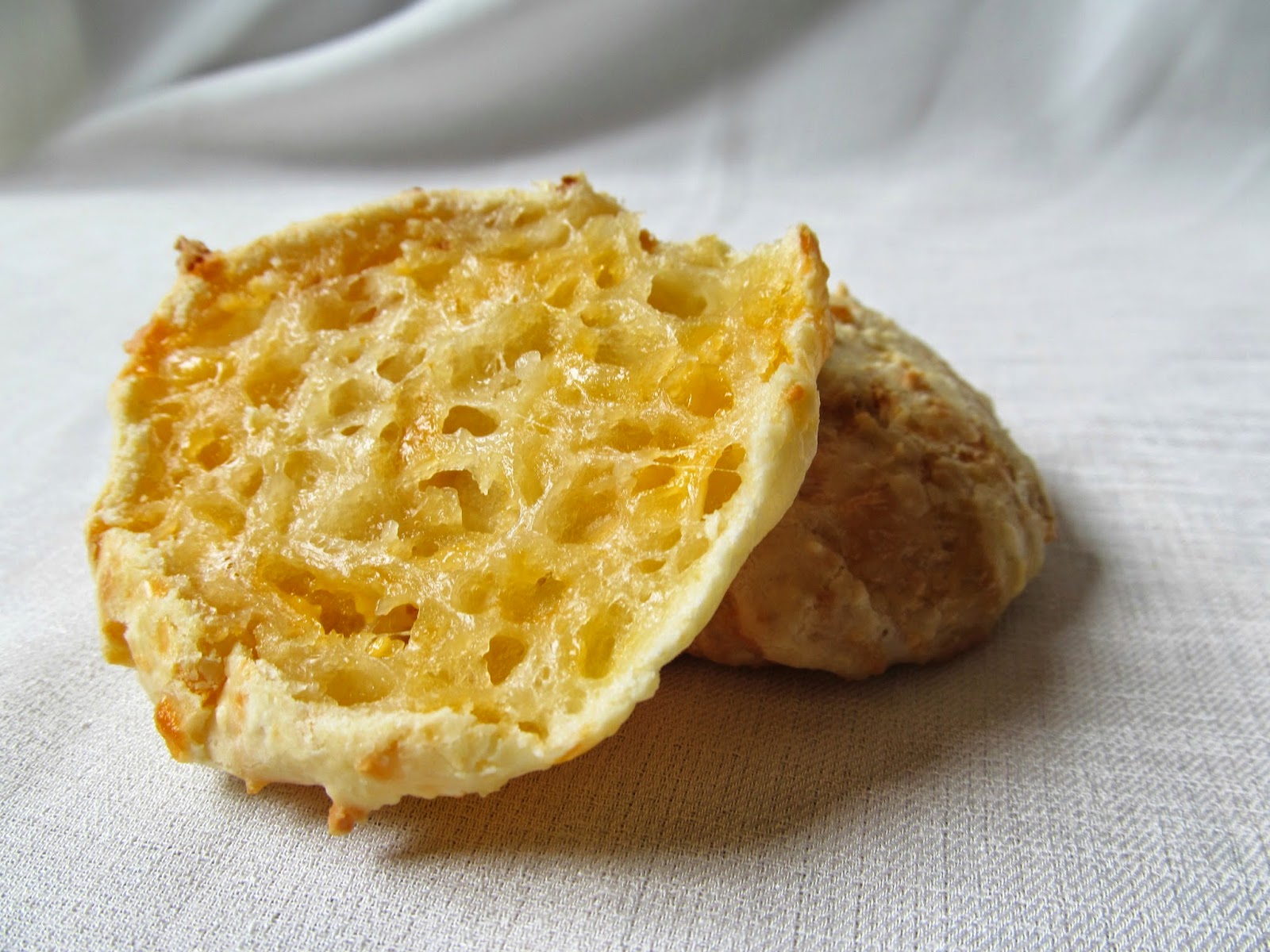 Sometimes I find myself wary of savory baking projects that I've never tried.  (I know I'm not the only one, given the sometimes unfavorable reaction to the Savory Pot Pie challenge that I hosted).  I don't know why I ever question whether I will enjoy a foreign savory baked good because it's always such a pleasant surprise, and this challenge was no exception!

These little rolls are made with tapioca starch, milk and butter, and are flavored with cheese.  I chose smoked cheddar and pepper jack cheeses and threw in some dry onion soup mix for a salty little kick.  I couldn't imagine the dough rising in the oven, but it sure did and the results were SO good!  The rolls have a little chew but are tender enough for a sandwich.  (Though they barely lasted long enough to fill!) 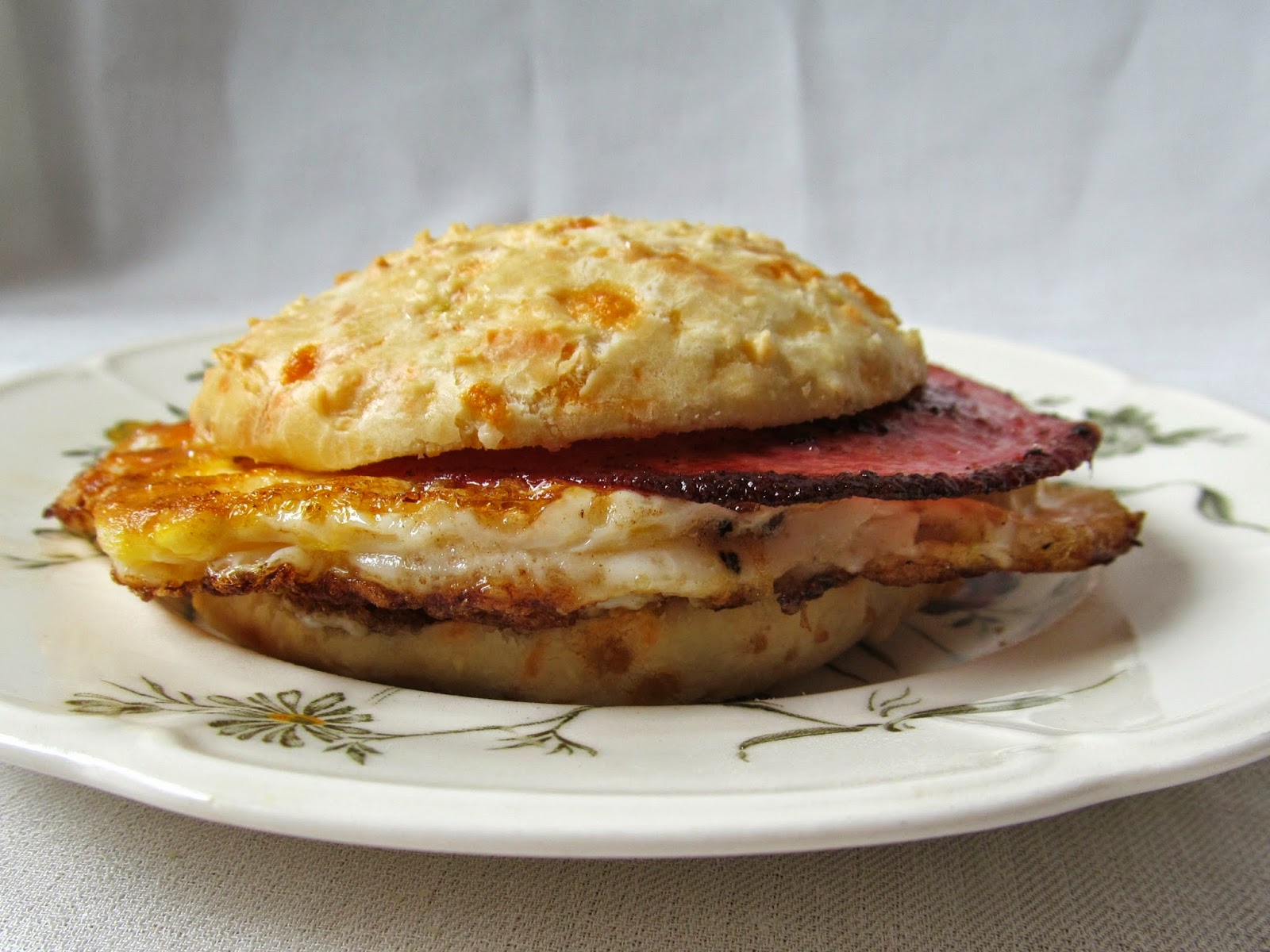 I had this clever idea of frying an egg with a slice of hard salami, glued together with a little pepper jack.  I'm pretty sure my husband could have eaten about twelve of these.

You know how quick and easy it is to whip up a batch of biscuits? That's how long it takes to make Pao de Queijo. Minutes. Which means I'll definitely be trying this recipe again!

Heat milk, butter, and salt in a small sauce pan until it comes to a boil. Remove from heat and set aside.
Sift tapioca starch into a large bowl. Pour the hot milk mixture over the tapioca and stir with a fork. The mixture will not form a dough yet. You will have a lumpy thin mixture for now. Keep stirring with the fork, breaking down the lumps as much as you can, until the mixture cools down to warm.

Add the grated cheese and soup mix to the tapioca mixture and mix well, using your fingers or a fork. Add one egg at a time, mixing until the dough comes together into a soft dough (after about 2 minutes of mixing). The dough will be sticky.

With oiled hands or a cookie scoop, form walnut sized rounds of dough and place them on a baking sheet lined with parchment paper. Bake for about 25 minutes or until they just start to brown on the bottom with golden spots of cheese on the crust. Don't over-bake or they will get hard and bitter.

Serve warm, sliced open and stuffed with fried egg and salami.  To make the eggs, heat butter over medium heat and crack one into the center of the hot pan.  Cook until the bottom is browning and the whites are all nearly set.  Break the yolk with a fork and sprinkle a pinch of grated pepper jack cheese on the center of the egg.  Place one slice of hard salami over the cheese and flip.  Cook the second side just until the edges of the salami begin the brown.  Serve immediately on a warm split roll.
Posted by Created by Hannah Grunzke at 8:18 AM