For the March Daring bakers’ challenge, Korena from Korena in the Kitchen taught us that some treats are best enjoyed upside down. She  challenged us to make a tarte tatin from scratch. 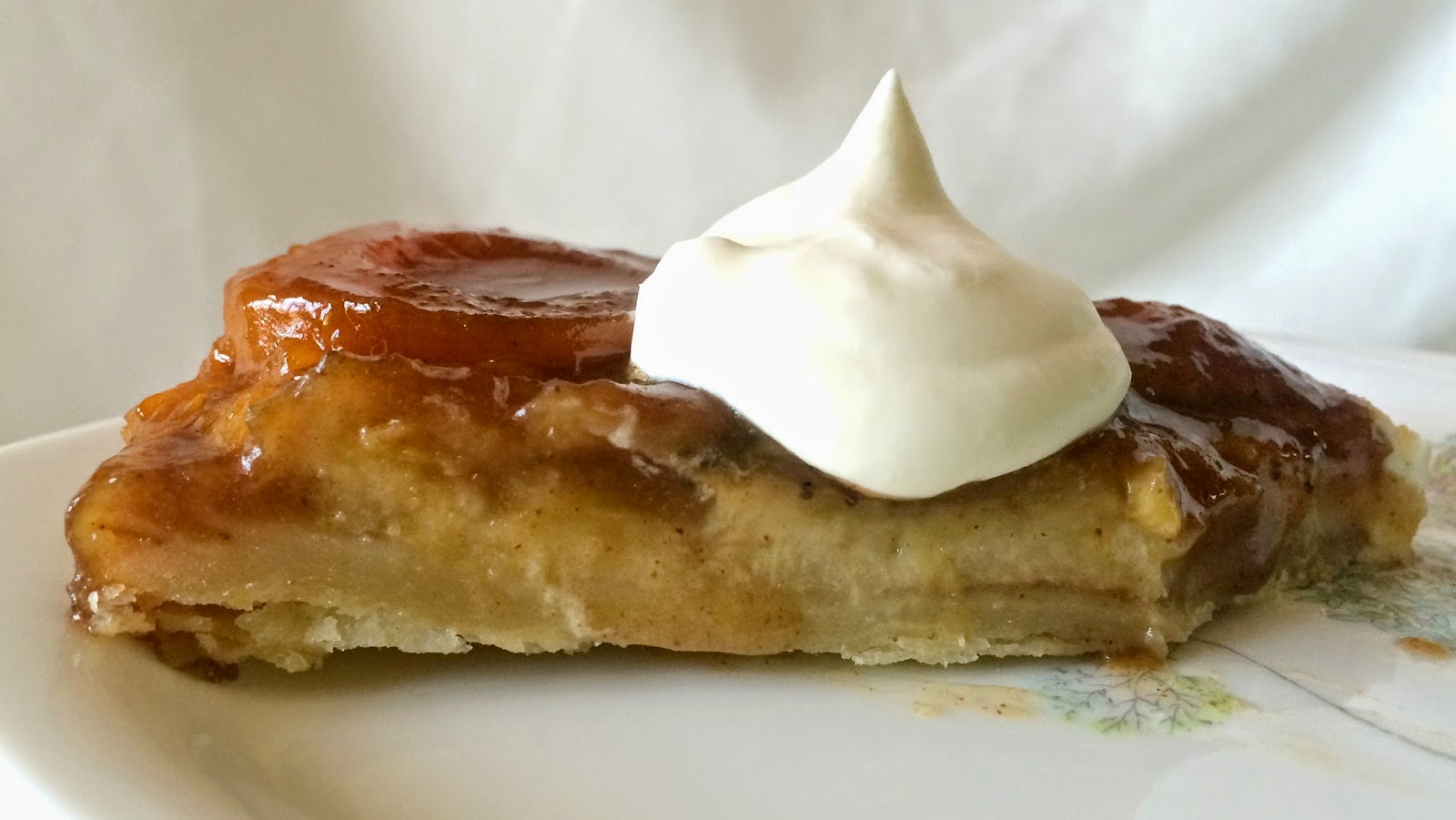 I thought our challenge host's description of a tarte tatin was really perfect:  "This classic French dessert is basically the apple pie version of an upside-down cake: apples are caramelized in sugar in a saucepan, covered with pastry and baked, and then inverted on a plate to serve. It’s a great example of the magic of caramelized sugar: the apples take on a deep, rich mahogany color and become infused with the complex flavors of a well-cooked caramel, and the crisp puff pastry base also becomes practically candied with caramel at the edges, resulting in a fantastic mix of soft, crunchy, and chewy textures." 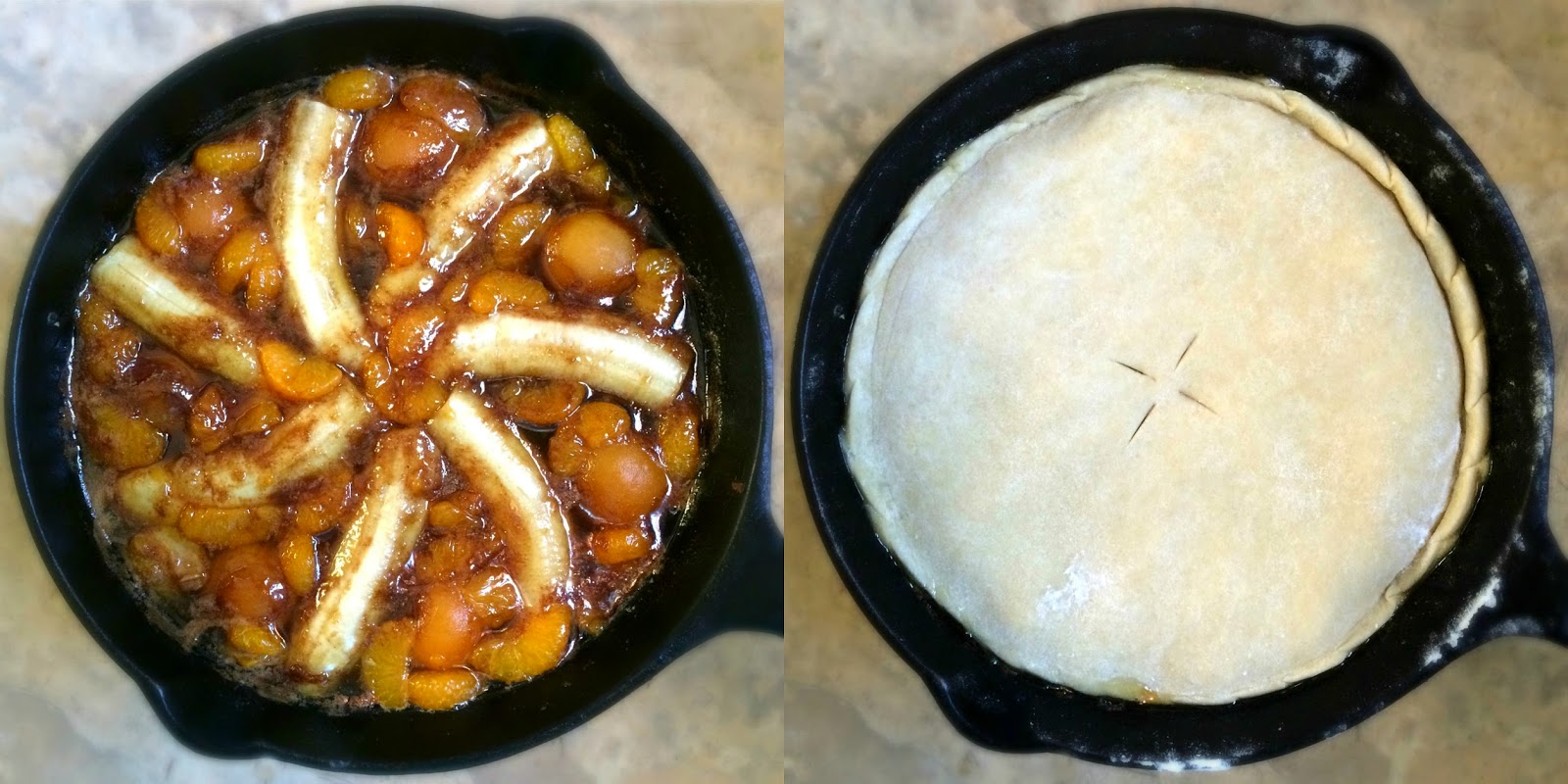 For my tatin, I chose to replace the classic apples with banana, apricot and mandarin oranges...all of which melt together in a delicious caramel.  I especially enjoy the oranges as they basically disintegrate into the caramel, which is flavored with a touch of cinnamon and rum.  Yum!  Though my favorite part of this dessert is the homemade creme fraiche.  It's insanely easy to make and super creamy and fancy.  This whole sweet treat is pretty easy to accomplish, actually.  I made two this month and both were done in time for breakfast because I always make my crust the night before.

Above you can see how it's made.  The filling is cooked on the stove top until caramelized.  The filling is then topped with a layer of dough.  Once it's baked, the whole thing is turned onto a platter and the top crust becomes a bottom crust. 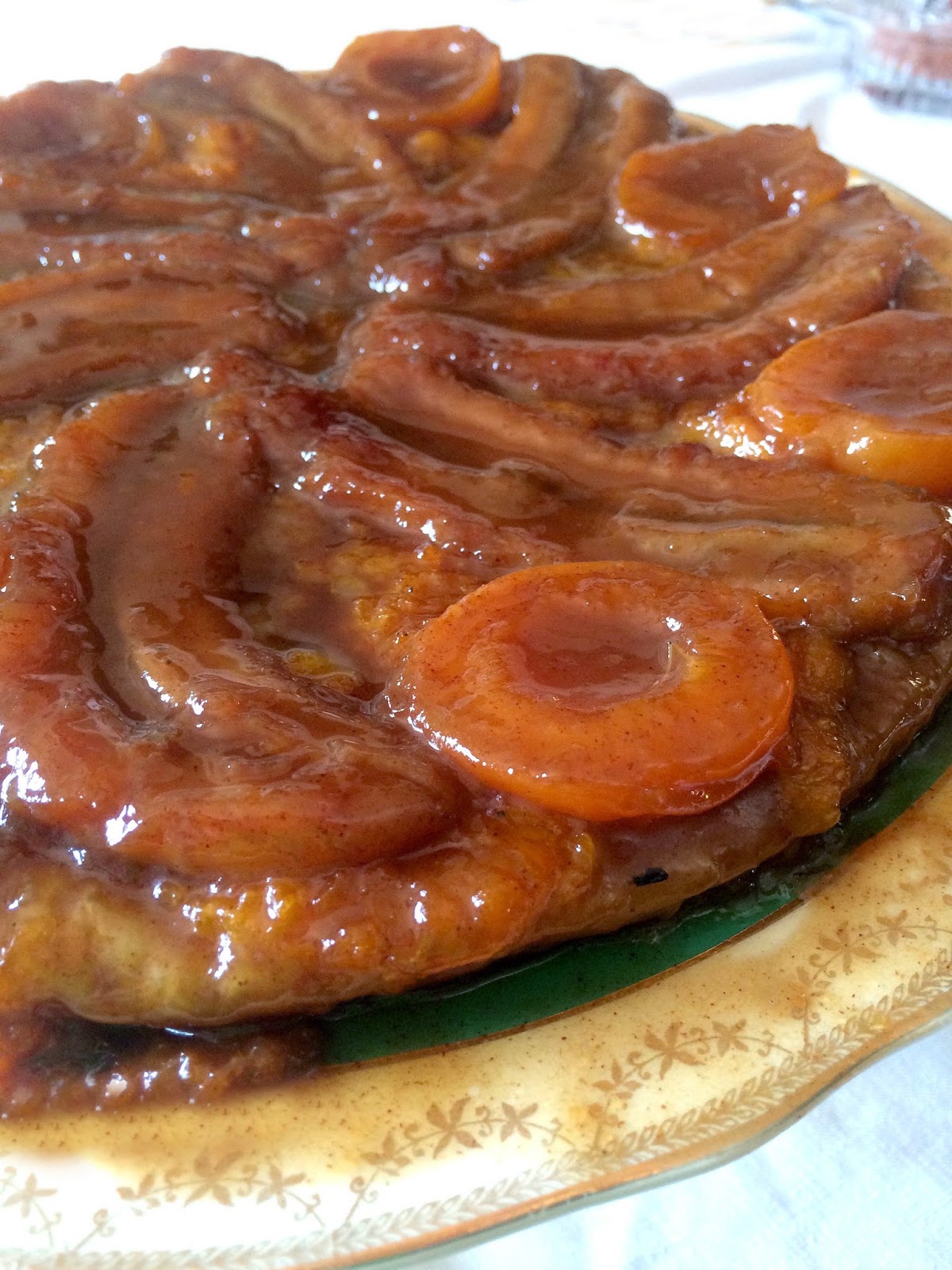 Korena told this little story about the tatin's origin. Maybe it's a true story, maybe not, but it's kind of fun:

"The tart is named after the Tatin sisters, who ran a hotel near Paris in the 1880s. Apparently, one day one of the sisters forgot to put a bottom crust on her apple pie, but instead of the disaster she was expecting to pull out of the oven, she ended up with a dessert so loved by the hotel guests that it became the hotel’s signature dish."

Korena's apple tatin looks amazing, by the way.  You can find the PDF file for this challenge here.

Stir together until blended (shaking in a covered mason jar is easiest).  Let sit, covered, at room temperature overnight.  Refrigerate after 10 hours.  Before serving, add a pinch of sugar or two and whip for several minutes using an electric mixer on high until thickened and fluffy like whipped cream.

Whisk together flour, sugar and salt in a large bowl. Drop in shortening and quickly grate butter directly into the bowl using a cheese grater. Using your fingers or a pastry cutter, work butter and shortening into the flour mixture until it's broken down into course, chunky crumbs. Stop mixing when the largest crumb is about the size of a pea.

Using a fork, quickly stir in 1/3 cup of very cold ice water.  If needed, stir in more water in sprinkles until most of the flour has been picked up by the dough. Turn the rough dough and crumbs onto a floured surface. Fold the dough over on itself (a very gentle knead) just until the dough holds together in a mass, about 10 times. Do not over mix! You will be able to see bits of butter in the dough and this is a good thing.

Shape the dough into a disk (like a burger patty). Wrap in plastic wrap and refrigerate for at least an hour before use. The dough will keep in the fridge for a full day, or you may freeze the dough for up to 3 months. Bring back to a thawed chill before rolling.

Melt butter in a 10-inch skillet over medium heat. Stir in sugar, cinnamon, and salt. Cook, swirling the pan occasionally (but do not stir), until the mixture browns lightly, about 3 minutes.  Do not over-brown, and if it burns, start over!

Arrange the fruit in the skillet, overlapping as needed. If it's going to take you a minute to arrange the fruit, remove the pan from the stove while you do this.  Cook without stirring for 3 minutes. Drizzle vanilla and rum over the fruit and cook until the liquid has thickened, about 1 1/2 minutes. Remove from heat.

Roll out the tart crust 1/4 inch thick using a floured rolling pin on a well-floured surface.  Cut the dough into a circle by tracing a 10-inch skillet or lid.

Place the round of crust on top of the fruit, and slice some vents into the center of the dough. Tuck the edges of the dough in around the filling a little. Transfer to the oven. Bake until the crust is golden brown and puffed, about 25 minutes. Remove from the oven and carefully invert the tart onto a serving plate.  To invert the tart, cover the skillet with a serving plate and turn over in one quick motion, then slowly lift the skillet. If the fruit has shifted, use a spatula to move things into place.


Serve warm, at room temperature or chilled with dollops of crème fraiche.
Posted by Created by Hannah Grunzke at 5:30 AM