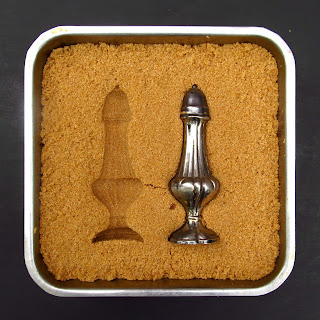 You might remember my brown sugar casted chocolate post?  The comment section on my post, and other forums that posted it, is full of possible suggestions for how to smooth up the surface of the casted candies.  Brown sugar creates a grainy effect on the outer surface of the chocolate.  From cornstarch to a damp cloth to tinfoil, I hoped to eventually try them all.  I'm no expert, but I said I would give it a go and I did! 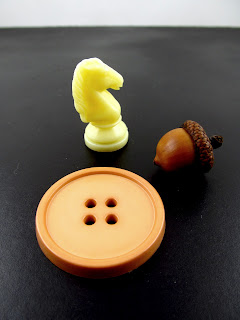 This time around, I used these three objects: an acorn, a large button and a knight.

And for casting mediums, I used cocoa powder, powdered sugar, flour, cornstarch and once again brown sugar (for comparison).  I also tried the suggestion of pressing the object into foil in the brown sugar.  I thought this was a really good idea until I realized the foil would fold when fitted to a rounded object.  It also tore in places, so that was a no-go.

I pressed all three objects into the casting medium, filled them with melted chocolate and chilled them in the freezer, then brushed them off with a dry soft toothbrush.  If I couldn't get the medium off the chocolate with a brush, I then soaked them in cold water and washed them off in really cold water several minutes later. 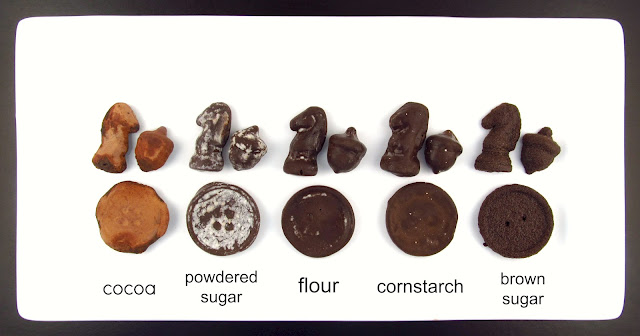 And here is the outcome!
I tell you, I had really high hopes for the cocoa powder.  But it didn't hold its shape when the objects were removed and it stuck all over the chocolate a lot thicker than I had expected.
The powdered sugar held the details but wouldn't wash off the surface of the chocolate despite great efforts.
And surprisingly, the cornstarch didn't hold it's shape for the fine details very well, either.   I know it's used in factories for making gummy bears but those are a rounded shape similar to an acorn.  For the fine lines, though, it didn't work for me.

The brown sugar held its shape, but as expected it was grainy looking.  It was especially evident with these tiny objects.  And the big success of the day:  flour?!  I was really surprised!

You can't see it well in this picture, but I had no success with the white chocolate.  Twice it "burned" and seized up when I melted it and I had to start over.  When I finally kept my eye on it and poured it into the mold when thin enough, it hardened too fast and ended up lumpy plus the flour stuck to it really badly. 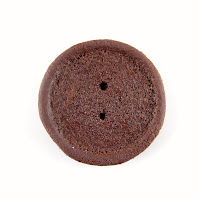 For the record, I also tried cooking spray on the brown sugar but it was a lumpy fail.  The surface of the chocolate that was in contact with the oil did not set up and was so fragile the stem wouldn't hold up and broke clear off.
And I took a damp paper towel to a grainy looking button though it didn't go so well.  It did smooth out a little but to do this on every surface of every chocolate would be insane.  Realizing this, I gave it a sort of a half-effort.

For comparison, here is the salt shaker casted in flour.  I will admit, I used bread flour because that's all I had.  I have no idea if other types of flour would make a difference but I'm guessing all-purpose would work out the same.

Below this photo, you can see the original brown sugar casted shakers.  I overexposed both photos a bit so you can see the fine details.  The flour created a really smooth, detailed surface, though it's tricky to get every speck of flour off the surface of the chocolate.  I gave it a moderate effort and this is the result.  It looks pretty good and the flavor isn't affected by the flour specks.


My choice of subject on the last post caused quite a stir due to its apparent phallic nature!  Yeah, ok, I get it.  My point was that I wanted to add salt and pepper to the chocolate, which I did, and it was good.

Thanks to everyone for your (non-phallic related) suggestions on the original post!  It's been a lot of fun and I learned a lot along the way!

Posted by Created by Hannah Grunzke at 4:11 PM