This month the Daring Bakers kept our creativity rolling with cinnamon bun inspired treats. Shelley from C Mom Cook dared us to create our own dough and fill it with any filling we wanted to craft tasty rolled treats, cinnamon not required! 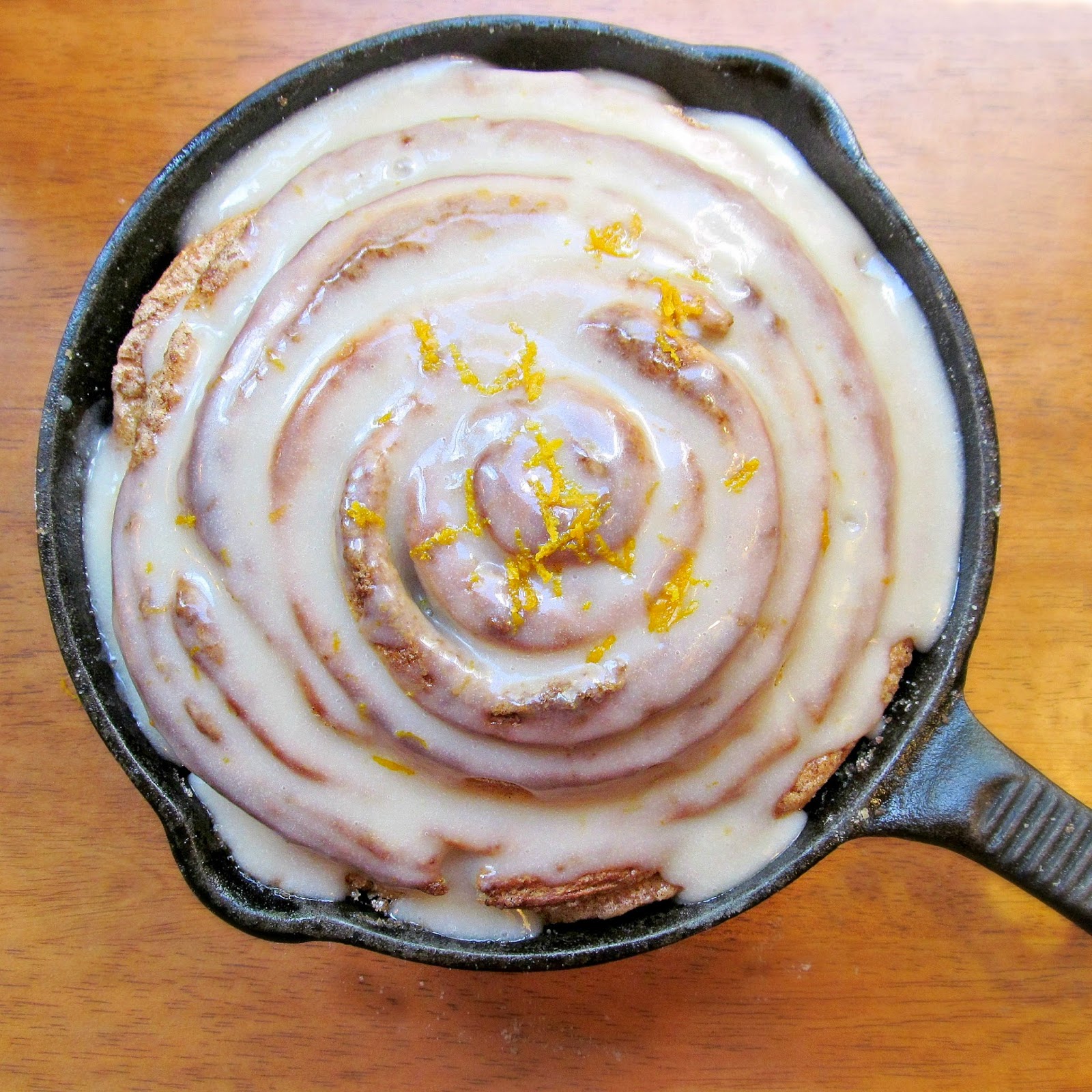 I just recently became obsessed with this skillet cinnamon roll on the Sprinkle Bakes blog.  I've also been going through a list of recipes from my grandma's church cookbook, and one happened to be called "Something Different Cinnamon Rolls."  It was my Grandma Betty that contributed that recipe to her community cookbook, and it's a fun one to get creative with.  The recipe includes yeast and flour and all that traditional stuff, with the addition of a box of cake mix.  So you can imagine the flavor combinations get endless at this point.  Chocolate mix with cinnamon chocolate filling...Lemon mix with lemon curd filling...Spice cake with almond and apricot filling...I could probably fill a notebook with these! 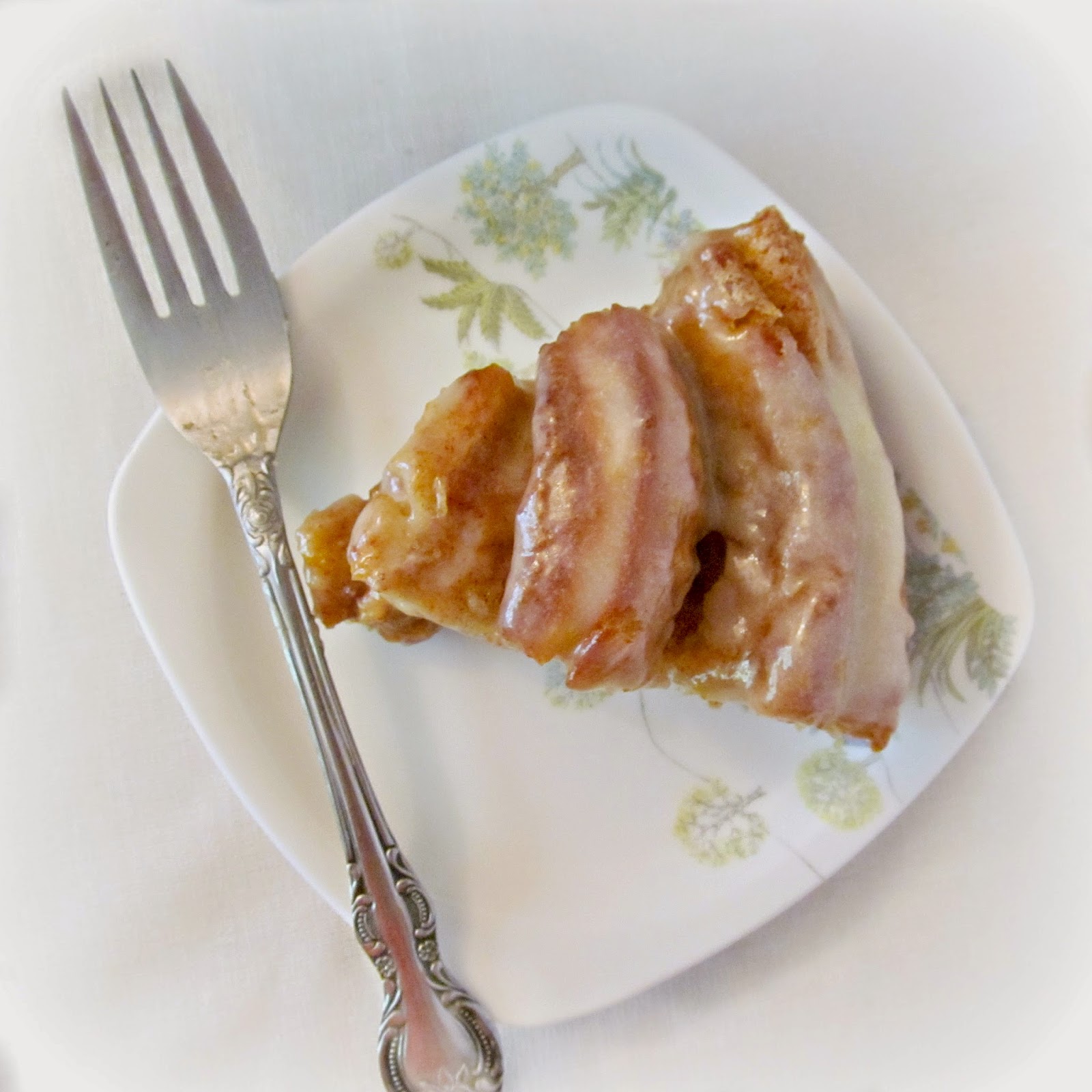 I went to the store pretty open to whatever came to mind in the cake mix aisle.  And I settled on carrot cake mix using orange juice in place of water, cinnamon brown sugar filling with orange zest, and a simple powdered sugar glaze with cream cheese and more orange zest.  These flavors are a total knockout and the skillet method creates endless layers of gooey goodness where almost every bite is the soft and warm center of a cinnamon roll that we all love!
Usually when you make cinnamon rolls, you roll up a rectangle of dough and slice it into little rolls.  This time, you will cut the dough into strips and wrap them around in a large pan.  It's kind of a messy process.  But it's worth it.


Orange Spiced Skillet Rolls with Cream Cheese Glaze
Makes one 10 inch, one 8 inch and one 6 inch roll (these are the sizes of cast iron skillets that I own).  You could also use a couple 9 inch cake pans.  The dough may also be rolled and sliced like regular cinnamon rolls to make 2 or 3 dozen small rolls. 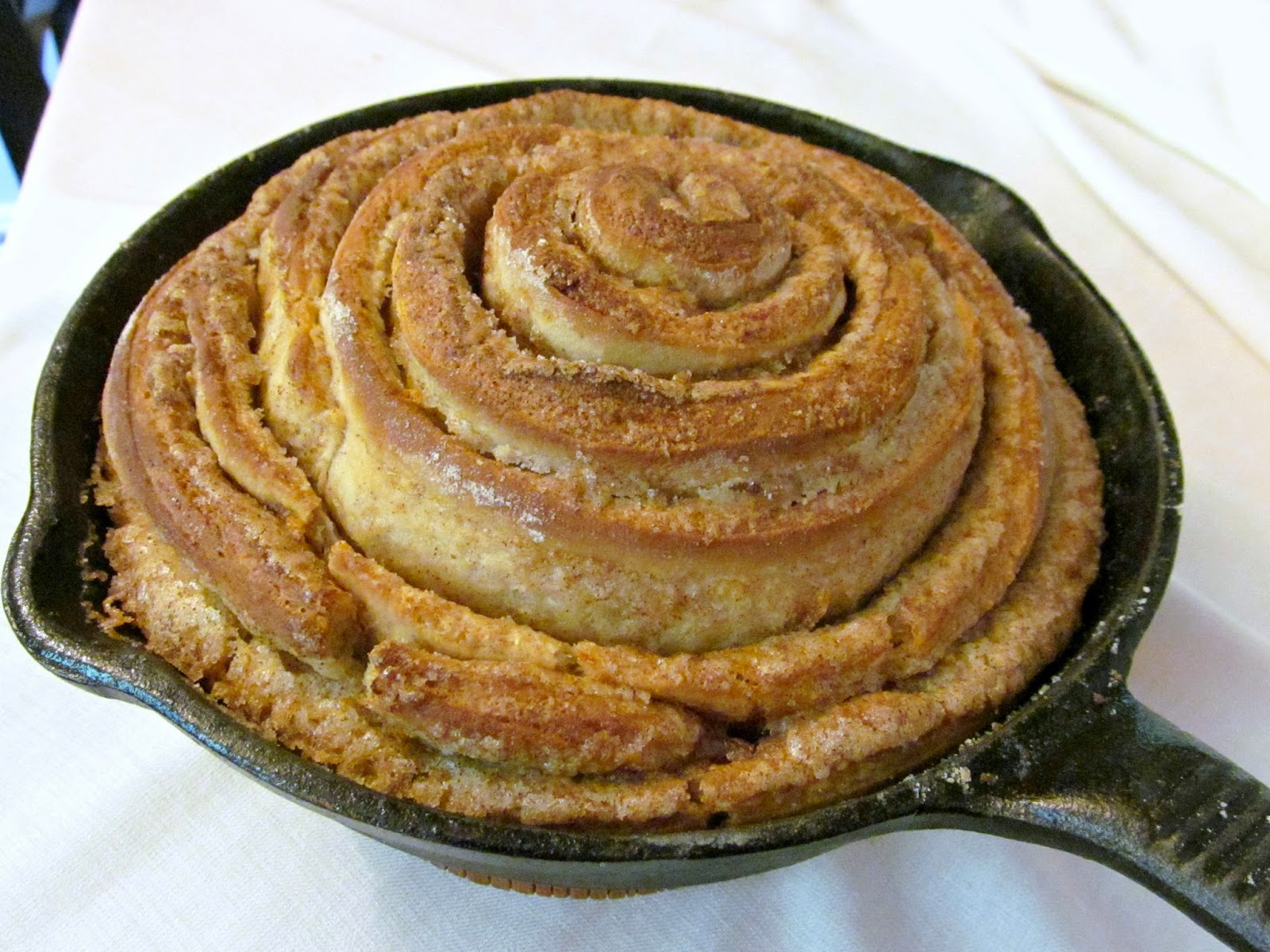 
Dissolve cake mix, salt, yeast and vanilla in warm orange juice in a very large bowl.  Stir in flour one cup at a time.  If needed, add more flour in 1/4 cup increments until the dough is pulling together around the spoon and not sagging wetly into the bowl.  Cover and let rise for one hour.  Punch down and rise on the counter until doubled or in the fridge overnight, covered in greased plastic wrap (it will rise very tall overnight).  On a well floured surface, knead the dough for a couple minutes, adding more flour as needed to create a dough that is smooth and a little stickier than bread dough.

Let the dough rest for a few minutes while you clean up the counter.  For the filling, mix together cinnamon, white and brown sugar and orange zest in a bowl.

Divide the dough in half and roll each piece into a large rectangle on a well floured surface (mine was about 16 by 12 inches and 1/3 of an inch thick).  One half at a time, warm the softened butter in your hands and spread the butter over the dough using your fingers.  Spread each rectangle of dough with half of the filling.  Trim the edges neatly and slice the rectangle into even strips about 2 1/2 inches wide (I sliced mine the long way but it may have been easier to go the other way and have shorter strips).

Roll up the strips into a spiral, overlapping the ends barely when needing to start a new strip, until your roll is too big to manage without sagging and falling over.  Place this roll in the center of your skillet.  Carefully wrap additional strips around the center roll until your skillet is full (or close to it).  I had almost exactly enough dough to fill a 10, 8 and 6 inch skillet.  Let rise about an hour or until puffy but not quite doubled in size.

Preheat the oven to 400F.  An 8 inch roll will bake about 25 minutes.  Give or take 5 to 10 minutes for the smaller and bigger rolls.  Bake until a skewer inserted in the center of the roll comes out clean.  Cover the top with foil if it's too dark before the center is baked.

For the glaze, melt cream cheese, butter, milk and orange zest together in a medium saucepan over medium heat.  Whisk until smooth (though there may be tiny lumps of cream cheese remaining).  Add powdered sugar and whisk vigorously until smooth. If the glaze is too thick, add a little milk to thin it out.

Glaze the rolls while they're hot and serve the rolls sliced into wedges while still warm.

Posted by Created by Hannah Grunzke at 6:30 AM